Why You Should Pay Attention to Chef Jeff Wiley 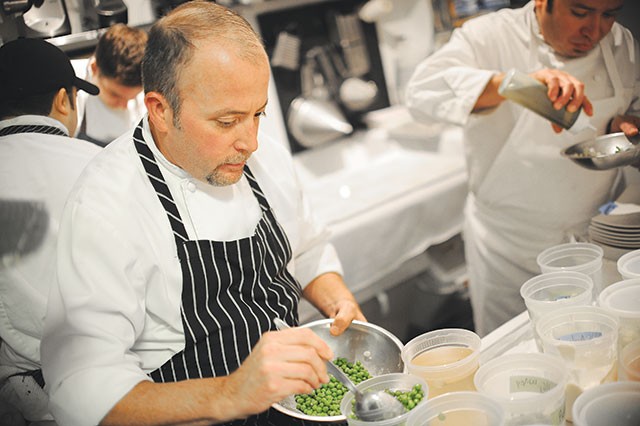 The scene on the Monday before Thanksgiving was a chaotic one. More than 90 souls, an eclectic collection of industry, food hounds and hobnobbing types, packed every inch of dining space available at Feast, all hungry to sink their teeth into what guest chef Jeff Wiley was cooking.

The third featured player in Feast chef Stefan Bower’s Monday Night Guest Chef dining series, Wiley’s kitchen takeover had been announced weeks prior. After leaving Beat Street Coffee Co. and Bistro on October 3 on what he describes as “not the prettiest” terms, Wiley, a 15-year professional of the San Antonio food scene, was still a bit of a mystery. What happened? What does the future hold for the chef?

To answer those questions, you have to know Wiley himself. To say that he broke the mold would be an understatement. Wiley first entered the culinary world as a true novice and at an “old” age, admittedly. The San Antonio-area native who’d previously focused on competitive cycling and building custom bikes entered Austin’s Texas Culinary Academy (now the Le Cordon Bleu College of Culinary Arts in Austin) in 1998 at 28 at the suggestion of his grandmother.

“It was a disaster. I didn’t know what I was doing that first year,” Wiley says, “the master chef was pretty harsh on me, but we became close by my second year.”

Always a quick study, he began taking notes from other students: from Macaroni Grill cooks in his early kitchen days, to the best five students in class and, eventually, the top dog, which led him to becoming the third in his class.

The road wasn’t always smooth. Wiley graduated in 2000 only to land his first job at a local hotel “cutting watermelon for 400 people.” He quit after a week and made his way over to Polo’s at the Fairmount Hotel under Mark Collins, (the eatery was previously helmed by Bruce Auden in the mid-’80s), where Wiley stayed for a year and a half. From there he moved on to The Lodge, where he learned a thing or two from Jason Dady.

“I didn’t know what I was doing at that level. I owe a lot to Jason for really lending a lot of his knowledge, but at the same time … he worked my tail off. I’d get out and I didn’t know what hit me,” Wiley laughs while remembering his days of keeping his head down at Dady’s a la minute kitchen. “It was my first real restaurant in that new generation of young chefs coming into town.”

He kitchen-hopped while making several returns to The Lodge, where he met Robbie Nowlin, now a close friend and inspiration (“I was the next guest chef at Feast after Robbie–that’s an insane amount of pressure”). The mid-2000s saw Wiley leave town for Laredo’s La Barranca Grille to work alongside his former classmate, Alberto Gutierrez. The restaurant earned a nod from Texas Monthly’s Pat Sharpe in June 2005. He returned to San Antonio to run Saffron (off North New Braunfels) in 2006, and later joined Hotel Contessa’s Las Ramblas in 2007 as chef de cuisine.

“For me, it was about the overall experience, trying to keep hotel food out of the hotel restaurant,” he says. Wiley reworked the menu, adding Spanish influences such as the Manchego-stuffed and jamon Iberico-wrapped chile guero.

But that life wasn’t for Wiley. While resources are plenty, crafting a hotel-safe menu was too confining. Ever the student, the idea of owning his own kitchen has crossed Wiley’s mind, especially these days as he cranks out close to 600 plates on a Monday evening.

The six-course tasting was prepared with the help of former colleagues Gutierrez (visiting from Laredo), Bowers, Nowlin and Feast sous Ezekiel Cavazos, totaling 11 pairs of hands on deck that brought Wiley’s elaborate vision of a vibrant pea salad, earthy sous-vide sweetbreads, braised rabbit and the aforementioned chile guero to life, among other dishes.

“Getting to share the stage with a talent like Jeff is humbling,” Nowlin said while hinting at a possible pairing between the two, “other cities have done it (co-executive chef concepts), San Antonio has never done that. There might be a spot somewhere downtown available.”

For now, those aching to try more of Wiley’s handiwork will be able to visit the chef at NAO, where he’s joining executive chef Geronimo Lopez’s pro-staff.

“I’m competitive in nature, but as with cycling, my philosophy is that we’re a team,” says Wiley. “This is not ego-driven. It’s about saying, ‘I’m the young guy, and I’m happy to be supporting the champ today.’ If you don’t deliver, you don’t win.”