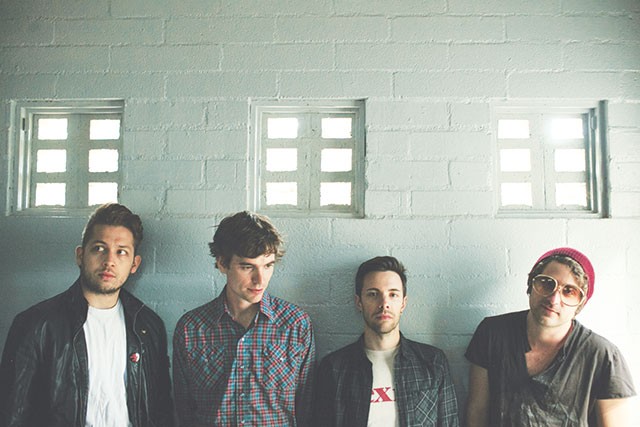 Wild Party’s bag of melodic tricks is Santa-huge. Loaded with vocal licks and memory worm hooks, the parcel must bulge out of the tour van’s back door in the way St. Nick’s parcel threatens to fall from his sleigh on rough turns.

Take “When I Get Older,” the opening cut from Wild Party’s first album Phantom Pop. Introduced by a guitar that sounds like a worthy update to Hall and Oates’ “You Make My Dreams Come True,” singer and Boerne native Lincoln Kreifels approaches a verse with precise weighting of syllables.

Kreifels slurs over unimportant words in identical rhythm and accents the internal rhyme (“dock,” “rock,” “talk”), breaking out of this mold as a transition to the pre-chorus.

Like many of the tunes on Phantom Pop, “When I Get Older” is a three-minute workshop on melody writing for singles. On the buoyant chorus—“Maybe there’s still hope”—Kreifels extends the “hope,” drawing the word into an “oh, oh” riff that screen-burns its way into the secondary auditory cortex, where the brain processes melody.

As part of Wild Party’s songwriting process, if a line isn’t infectious, it’s erased from the drawing table. “We’re very much focused on hooks,” Kreifels told the Current. “A lot of times we won’t write anything down. If the part wasn’t catchy enough and we forget it, we assume it wasn’t good enough.

That’s how we write: If it sticks in our head long enough, we end up recording it.”

Through 12 songs of brightly lit guitar pop, Wild Party’s debut throws a bash of hi-fi six-string, toe-tapping keyboards and counter-melodic bass, all with heavy emphasis on a 16th beat hi-hat shuffle. Each ditty is surprisingly elastic, changing attitudes, styles or decades between parts. “I think we cover a lot of ground,” said Kreifels. “It’s all very much pop-structured songs, a lot of down verses and big choruses. It’s got different styles too, influences from the ’60s, ’70s, ’80s, not a lot of ’90s, but a lot of today as well.”

“Lucas [Hughes, guitar] and I write the bones of the songs and we think of the dynamics of the songs, making different parts stick out,” said Kreifels. “One thing that’s helped us in that is we piece different ideas together that weren’t necessarily the same song at first. It creates an unexpected accent in part of a song that wasn’t done if we’d written that whole song in one sitting.”

To complement this writing process, Wild Party had some serious time to tone up the arrangements on Phantom Pop. The band, with half its members in Texas and half in California, began writing and recording this material in 2008. “I would say I’m both excited and frustrated,” said Kreifels. “There’s been frustrating times and we’ve made mistakes in the process, but we’ve learned a lot and we’re in a better position. We’ve got more experience and I feel like we’re more ready for the release now.

Initially, the band jumped off to an extraordinary start, playing their third ever show in England, opening for UK cyclamate-pop trio the Wombats. Starting out with a match-spark of hype, the flame soon cooled, convincing Wild Party to slowly gather the foundation for a long-burning career.

“That was a crazy experience,” said Kreifels. “We thought we were about to break it huge right away five years ago. Obviously that wasn’t quite the case. It was an amazing experience. We gained a lot of confidence and exposure to how things worked in the music business. For me, I didn’t step away from the mic stand the entire trip, now I’m covering the whole stage pretty well. It was good to get thrown into the fire like that.”

For the past 18 months, the band has been on a touring grind, a helpful schedule for a band with members scattered across the Golden and Lone Star states. “That’s what we really needed,” said Kreifels. “We live in different cities, half of us in California and half in Texas. The best way for us to get better at what we do is to go on tour.”

Though a few metro areas could claim Wild Party as their own, San Antonio feels like a backyard gig for the quartet. “It definitely feels like a hometown show every time we play in San Antonio,” said Kreifels. “Our friends and family, our parents come out, whether we like it or not.”