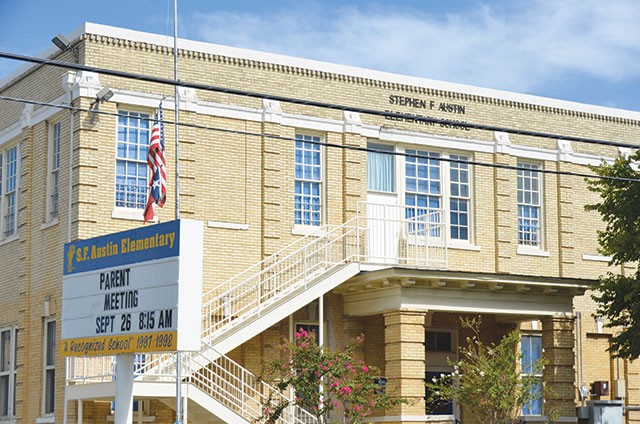 The oldest elementary school in Bexar County is set to close for the 2016-2017 school year.

Stephen F. Austin Academy is one of five schools that will close as part of the San Antonio Independent School District’s long-range plan to save costs by consolidating schools in a district that has seen a continuing decline in enrollment. The school was originally built in 1878.

But Shannan Hern, whose children have attended the school for the last four years, said the decision to include Austin Academy, which has award-winning mariachi and fine arts programs, in the first school closures doesn’t add up.

“The school is incredible. Its academic focus is awesome and its fine arts program is amazing and has many accolades,” Hern said. “And we’ve been trying to make appeals and make solutions to keep it open. We have not gotten anywhere.”

In 2010, voters passed a $515 million bond proposition to renovate 22 schools. But before the 2010 bond, in late 2007 and early 2008, SAISD instituted a citizen committee to create a long-range plan for the district, and part of that conversation included closing 13 schools and relocating those student populations to newly renovated schools.

Austin Academy, along with Steele, W.W. White, Nelson and Brewer elementary schools, are slated for closure. All of the schools, except for Austin Academy, will close for the 2015-2016 school year.

However, Austin Academy has a glaring difference from the other four elementary schools. This school is one of 13 SAISD academy schools, each of which offers a different focus for students. Austin Academy’s niche is the fine arts. It’s also the only school that offers visual and performing arts education under the high-school level, Hern said.

So is this a case of picking on the arts?

“One of the things that this will help bring about is getting more art,” Price said, adding that Austin Academy students will be moved to Hawthorne Academy, which also has an award-winning fine arts program. Price reasons that a larger pool of students will strengthen art and music programs.

Additionally, she said consolidation will allow SAISD to facilitate more funding toward the arts thereby improving the programs.

That’s what Hern said SAISD would say, too. And she’s just not convinced.

“They’ve said that they are going to relocate programs to Hawthorne and promised to parents when the closure was pitched, and it was pitched as consolidation, that the program will move and you can move,” Hern said. “But there is not enough room … my friend just enrolled his children at Hawthorne and said it’s full.”

“Hawthorne is not full … it is under construction,” Price said, adding that last spring SAISD completed a three-story building and construction at the school is ongoing. “There will be room.”

Price said SAISD is considering limiting the fine arts program to only allow fifth through eighth grade students, though there would still be activities for younger grades. And students already in the program will automatically transfer to Hawthorne. The final destination for students depends on new boundaries SAISD’s board will approve in January.

In a letter to Austin Academy parents, SAISD Superintendent Sylvester Perez said the district will transfer students to excellent schools with strong programs.

“In 2015-16, Austin students PK through fifth grade will move to Beacon Hill, Hawthorne or Bowden; sixth through eighth grade will be moved to Hawthorne or Twain. The Fine Arts program will be relocated to Hawthorne Academy. Over the last several years, these receiving schools have all achieved academic recognitions that matched or exceeded Austin Academy,” Perez wrote in a May 13 letter. “Austin Academy faculty and staff will follow the students as needed to the receiving schools. The remaining staff will be reassigned to other SAISD positions.”

On June 3, Perez again wrote parents, informing them that the school would stay open for one more school year while SAISD identifies a future use for the facility.

“The location provides some unique opportunities, including the possibility of a specialized school,” Perez wrote. “For example, San Antonio College has proposed a partnership in repurposing the school as an eighth grade prep academy for students interested in pursuing admissions to one of our Early College High Schools. This and other opportunities will be thoroughly reviewed for the best fit for the District and our students.”

So while the school is closing, the building itself will still be utilized.

As for the consolidation, well, that’s a numbers game.

“We had closed some schools, but it was not enough to compensate for that shift over time,” Price said. “We knew enrollment declined and population patterns changed, there are areas where there aren’t children. So we were also faced with not just enrollment going down, but also aging facilities.”

According to Perez’s May letter, SAISD prepared for the closure of all five schools by renovating and expanding nine campuses for a cost of more than $136 million.

“These new upgraded campuses will be excellent learning environments for our students—with offerings we cannot provide today (such as art classes and science labs in elementary schools).

And according to Perez, consolidation will raise SAISD standards.

However, there will be fall community meetings about the boundary changes, but those dates haven’t been nailed down.

As for Hern, she said the district’s choice to close Austin Academy just doesn’t smell right.

“They do have real issues, the district is down 20,000 students from its height, and there are lots of schools not at full capacity,” Hern said. “I really do feel for them because the area is in crisis, but this is a bright spot.”

Price said SAISD is sympathetic to the parents of Austin Academy.

“We understand the emotions around a school that someone has wonderful experiences from,” Price said.

Austin Academy supporters can attend a meeting (independent of SAISD) at 7 p.m. Thursday Oct. 16 at the Salvation Army Center of Hope, which is near the school; call (888) 244-0103 for more information or email austinacademyadvocates@gmail.com.