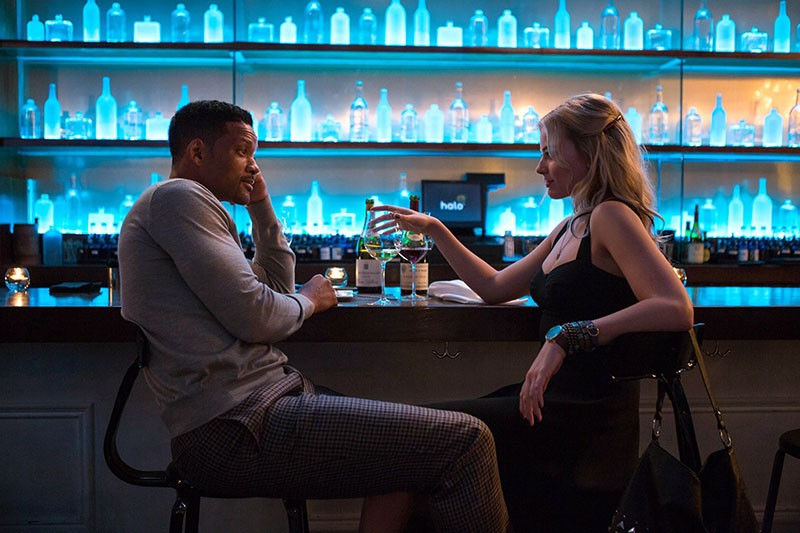 Remember when Will Smith was box office gold? There was a time — nearly 20 years ago — when he couldn't miss. Even if his movie was a dud, it still went cha-ching at the box office. Then Hancock (2008) happened and he hasn't done anything decent since, and given the mediocrity of Focus, expect the downward trend to continue.

Sure, Smith brings his trademark charm to Nicky, a con artist. And the gorgeous Margot Robbie (The Wolf of Wall Street) brings beauty to Jess, an aspiring grifter whom Nicky takes under his wing. There's no debating they're both easy on the eyes. Nicky calls grifting "a game of focus" that's all about getting peoples' attention and deceptively taking what you want. No doubt this deception is meant to be a metaphor for the film as well, thereby prompting writers/directors Glenn Ficarra and John Requa (Crazy, Stupid, Love.) to pull the old switcheroo on the audience in the final moments. The problem is the story lacks so much focus leading up to the finale that when the twist comes, we don't care because we've already lost interest.

The flow is disjointed throughout. Nicky and Jess meet in New York, and in the film's lone compelling sequence, he shows her the tricks of the trade regarding pickpockets and other small time hoodlumisms. More insights into their illegal business would've been welcome, as it's fascinating for law-abiding citizens to discover how criminals earn their living (this is one of the appeals of Goodfellas, for example).

Too quickly, though, the scene shifts to New Orleans. It turns out Nicky has a whole team of vandals, including his right-hand man Horst (Brennan Brown) and the loyal-to-a-fault Farhad (Adrian Martinez). Because we need to like Nicky, everyone on the team gets an equal share from all the capers, which makes Nicky look like a "fair" con man, oxymoronic as that sounds. Jess joins the team and, after yet another endless and languid conversation with Nicky, they sleep together.

Then, inexplicably, about an hour into the film, the scene shifts three years ahead to Buenos Aires, where Nicky and Jess encounter new characters and a new set of problems. You get the sense Ficarra and Requa ran into a narrative wall half way through writing the script, and their best solution was to go in a totally different direction. Big mistake. Now Nicky works for a racing team owner (Rodrigo Santoro) who's dating Jess, and the owner's overprotective bodyguard (Gerald McRaney) is a constant nuisance. The last hour is completely incongruous with the first, making it feel more like a sequel than it does the completion of a story. In a better movie, elements from the opening portion would return in unexpected ways in the second half; here, those elements are disregarded entirely.

Not helping matters any is the fact that Smith and Robbie have the chemistry of oil and water. Consider: This is a movie about con artists, so anyone who's seen a con artist movie before has to presume at least one of them is playing the other. And the filmmakers go out of their way to make us believe this is the case. But Nicky and Jess never so much as look comfortable with one another, and their long, tediously written conversations do nothing to make us believe they're kindred spirits. It's sad to watch talented, attractive people flirt so aimlessly, so un-sexily, even though you can tell they're really trying (probably too hard). The camera likes each of them individually, but not together.

The main appeal of any con artist story is the guessing game, trying to figure out who's secretly working with whom before the twisted ending reveals all. If done right, it all comes together seamlessly, but we never see it coming. Focus, however, is remarkable in that nothing about it is appealing, and the ending feels more forced than clever. You get the sense Smith thought it could be a tense, Out of Sight-type steamy thriller that keeps you guessing, but one look at the final product and it's obvious he couldn't be more wrong. Smith, knowing he's on a losing streak and with years of experience to inform him, should've known better and taken a pass on this one.

Smith and Robbie will also appear together in Suicide Squad, which opens August 5, 2016, and is part of the DC Comics Cinematic Universe. Smith will play Deadshot and Robbie will be Harley Quinn; the film will also star Jared Leto as The Joker.