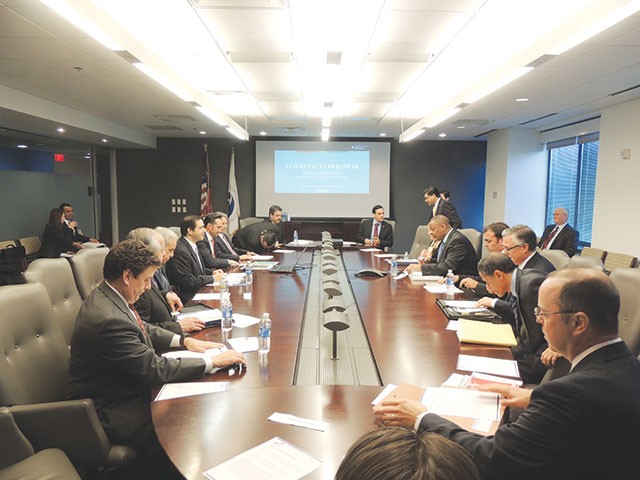 The pitch was pretty straightforward: The high-speed rail line could move passengers and cargo from SA to Monterrey in about two hours, complete with U.S. Customs pre-clearance. Moreover, the ask, on the U.S. side, was fairly modest. Since there is already a high-speed rail study underway from Oklahoma City to South Texas, Cuellar and co. wanted approximately $400,000 to extend the study down to the border.

On the Mexican side, the Nuevo León delegation confirmed they had already secured right-of-way from Monterrey north to the border, but indicated that without a continuance of the line from Laredo into the U.S., the government would be unlikely to begin construction. After all, “it wouldn’t make enough sense to drop passengers [off] at the border,” said Domene during a press conference held directly after the meeting.

The idea sounds rather bold considering it would be the first such connection between the United States and Mexico (to the north, Amtrak currently connects with Canada’s VIA rail in Montreal, Toronto and Vancouver), and considering high-speed rail is still a fraught issue in this country. Cuellar’s meeting with the Secretary of Transportation occurred just days after California lawmakers debated whether to proceed with the state’s $68 billion plan to link Los Angeles and San Francisco via high-speed rail. California Republicans strongly oppose the plan, though it has California Governor Jerry Brown’s overwhelming support and the blessing of the Obama administration.

San Antonio doesn’t have much of a history supporting public transportation of any kind, either. Just look at the heartburn we’re having over a streetcar. This is partially because area republicans equate streetcar with light rail (itself often used interchangeably with high-speed rail) and note that voters rejected funding such a line in Bexar County in 2000. Now multiply that opposition by a few billion and throw in some hyperventilating about border security and you have what seems like a guaranteed non-starter.

On the other hand, the idea has several things going for it. For starters, at the line’s projected beginning and end points, there’s already serious movement toward high-speed rail.

TxDOT’s Jeff Austin said the $14 million high-speed study between Oklahoma City and South Texas is already well underway. The Department estimates it will be completed by December of this year. A 2012 Express-News article described that study as “essentially a strategic plan that federal officials can reference when funding becomes available.” The high-speed rail proposed by Cuellar and the Mexican delegation would essentially be an extension of that potential line, and would help clarify an outstanding question of the study, which was the terminus point. You may have noted “South Texas” sounds rather vague, and that’s because the study initially left options open for ending in Laredo, Corpus Christi or the Rio Grande Valley.

This isn’t the only high-speed possibility in Texas, either. Much has been made of private company Texas Central Railway’s plans to develop a high-speed, electric train line between Houston and Dallas. Earlier this month, Foxx told attendees of the Texas Transportation Forum that two environmental impact studies for the proposed line would move forward this year.

Moreover, federal interest in developing high-speed rail networks remains high; President Barack Obama unveiled a plan to connect 80 percent of the country by high-speed rail in 2009, but was thwarted early on by wary Republican governors in several states who rejected federal funding on the grounds that it could put state taxpayers on the hook for billions more. Private-public partnerships, which would almost certainly be utilized in the SA-Monterrey line according to both Cuellar and Gonzalez, are seen as a way to mitigate this concern. Since the early days of high-speed rail planning, Texas has always been a prime candidate due to its spread-out cities and flat geography. However, Republican opposition to taxpayer-funded high-speed rail remains high as well, and given the long timetables for these projects, a change in administration could kill, stall or curtail these plans.

In Mexico, the excitement is more palpable. President Enrique Peña Nieto’s administration has moved quickly to make high-speed rail a reality, with planned lines in the Yucatán Peninsula and from Mexico City to Queretaro described as in a “very advanced” study phase according to Mexico’s Secretariat of Transport and Communications. Gonzalez also said that Mexico’s railways are slated to become deregulated in February, meaning the high-speed plan will be ripe for private investment.

Domene said the Mexico City-Queretaro line, which covers roughly the same distance as the proposed Monterrey-Nuevo Laredo line, is estimated to cost $4.5 billion and currently the government anticipates both lines will have virtually the same pricetag. The Mexican delegation said during the press conference that they anticipate construction and operation funding to be made available next year. “It’s really exciting to see what the Mexicans have,” said Cuellar during the press conference, “so we gotta make sure the U.S. catches up.”

While it’s too early in the process for Cuellar to start making promises about a timetable, budget or private partnership, the delegation was comfortable making the following statements: The line would be non-stop from Mexico to the border; would not operate on existing rail lines; and could get passengers between the two cities in about two hours. Cuellar said by phone that U.S. Customs preclearance and a strong collaboration from Mexico (“I feel that they’re going to do everything they can to make sure [the train] is secure,”) should help alleviate security concerns.

While it’s already fairly easy to take a bus or plane between San Antonio and Monterrey, a high-speed rail line would present a middle-class option. Direct flights can cost between $400-$500 round-trip and take about an hour (many non-direct flights aren’t much cheaper and can quadruple travel time), and busses cost about $50 one-way and can take more than eight hours to reach their destination.

The proposed high-speed rail would take only an hour more than a direct flight, and, based on what AmTrak’s Acela Express currently charges (this figure may prove wildly inflated since Acela is one of the world’s most expensive high-speed train fares) could cost about $75-$100 one-way. Because of the infancy of the project’s planning, a clear timetable was not made available, however, Gonzalez estimated that if construction on the Mexico side began in 2016, it could be completed within three years.