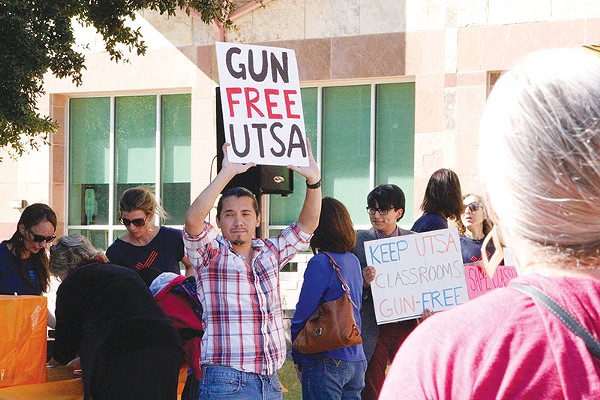 When Texas' legislators pulled the trigger on campus carry, they didn't realize that the day they scheduled the law to take effect is the 50th anniversary of the University of Texas at Austin mass shooting.

On August 1, 2016, a controversial campus carry law will allow concealed handgun licensees to bring their guns on public university campuses, much to the dismay of a large contingent of education professionals and students alike.

Ruth Heide Claire James, who was known as Claire Wilson nearly 50 years ago, is a survivor of the 1966 massacre. She has repeatedly told multiple media outlets that armed civilians on campus who engaged Whitman did not help the situation. Instead, they caused confusion, prolonging law-enforcement rescue efforts.

"Police are trained to handle this type of situation. I've heard from the police that stopped [Whitman] that day that [the armed citizens] actually made the situation more dangerous and put the people who were trying to save us at risk," she told the Austin American-Statesman in 2013.

The specter of that shooting five decades ago serves as a backdrop for the UT System as its campuses are creating plans that may include gun-free zones for submission to the regents, who will then vote on the proposals. A compromise in the law allows public universities to designate gun-free zones.

However, campus carry advocates, like Antonia Okafor, southwest regional director and Texas state director of Students for Concealed Carry, can't imagine how gun-free campuses could be safer than gun-saturated universities.

Okafor claims Umpqua Community College, in Roseburg, Oregon, the site of a mass shooting in October that resulted in 10 deaths, prohibited concealed licensees from carrying handguns.

"[That's the] very reason why these criminals know they can come on campus and know they can go in buildings, classrooms and offices and be able to prey on people who are the most vulnerable," she said. "That's the compromise itself, the exclusionary zones. I'm just hoping the administration making decisions sees excluding is counterproductive to the intent of the law and that students are empowered and able to defend themselves."

However, the Oregon community college was not a gun-free zone and at least one concealed handgun licensee told media he did not try to engage the shooter — who had way more firepower than him, by the way — because he didn't want to be mistakenly targeted by law enforcement.

None of this sits well with professors Walter Wilson and Ritu Mathur, faculty with the Department of Political Science and Geography at UTSA.

"Guns and learning don't mix," Wilson said, while setting up for a rally against campus carry at the downtown UTSA campus last week. "One of the most fundamental things that we need on a campus in order to promote good education is an ability to have spirited discussions and those need to happen in safe environments where nobody fears retribution for making arguments and challenging one another."

For Mathur, the language in question — gun-free zones — is in itself a troubling reflection of an over-militarized society.

"The whole thing is also, in a sense, when you are talking about these exclusion zones, you are trying to normalize militaristic culture around a university," Mathur said. "There's a particular taboo about weapons. There's a reason it's existed for centuries."

One of Mathur's specialties is international humanitarian law, a field of study that includes creating exclusionary zones, but not on college campuses, rather, in theaters of war for the safe evacuation of civilians out of combat zones.

"This is a university. This is not even a war zone," Mathur said angrily.

Nonetheless, UTSA will submit a plan to the regents that will probably include gun-free zones — and "war" between second amendment advocates and educators who want to keep weapons out of learning environments will continue to be contentious, but only one side will be packing heat.