Willie Nelson at The Majestic: A Shot of Stubborn Joy

Last night, country music giant and Texas treasure Willie Nelson delivered a warm and ambling performance of some of his most beloved songs (and a few clutch covers) to an adoring audience at The Majestic. It was the first of two special shows at the historic downtown theater, with another one scheduled for Wednesday night, and the reverent gravity of the evening was bolstered by the fact that show-goers were so grateful that Willie, who was visibly under the weather throughout the performance, hadn't cancelled due to illness, as he had done with a few shows last week.

For starters, I was quite impressed by Willie's opener, local-boy-done-good John Baumann, who, along with his solid backing band, gave a rollicking performance of his original Texas country tunes. While folks were beside themselves with eager anticipation for the main event, it was clear just a few songs into Baumann's set that this wasn't the kind of opener that you wanted to pass over. His rock-flavored country/Americana music, somewhat reminiscent of contemporary outlaw country torch-carriers like Sturgill Simpson and Eric Church, likely won him a handsome bevy of new fans.

Willie started his show with a subdued version of perennial fan-favorite and homage to liquid escapism "Whiskey River." But things really started to click when, after playing quickly through newer classics "Still is Still Moving to Me" and "Beer for My Horses," the wily old Redheaded Stranger launched into "Good Hearted Woman," that beautiful (and really quite sad) ode to all the women in the world who love their men in spite of themselves.

Willie's voice, on this and the other songs in the evening's set list, was strained, often forcing him to talk-sing (a style that has served him well through the years), except for occasional moments when, moved by the audience or some other, perhaps more mystical, force, he loosed a few bars in the soothing and plaintive croon that we all know and love.

To boot, his erratic and gently meandering guitar solo style has, while not suffering the ravages of time as much as his voice, devolved a bit. But that didn't stop the cheers. It also didn't stop the tears from streaming down my face as ol' Trigger's singular sound rang out, like some primordial, elemental power. It's difficult for longtime fans, no doubt, to watch a hero losing some of his stuff, but Willie's triumph has never been tied to the pursuit of perfection anyhow. And, on this evening and under these circumstances, his performance, far from depressing, felt like a shot of stubborn joy (or whiskey), like a defiant victory over time and all the other natural human frailties.

In an hour and a half set, Willie and his (righteous) family band played "Funny How Time Slips Away," "Crazy," "Nite Life," "Me and Paul," "Angel Flying to Close to the Ground," "On the Road Again," "You Were Always on My Mind," "Georgia on My Mind" (my personal favorite moment of the night), and a few more, including some very well-chosen covers of Hank Williams and Billy Joe Shaver songs. All in all, it was everything I could have hoped my very first Willie show (after 20 years of fandom!) would be: poignant, funny, open-hearted, and near-religious. 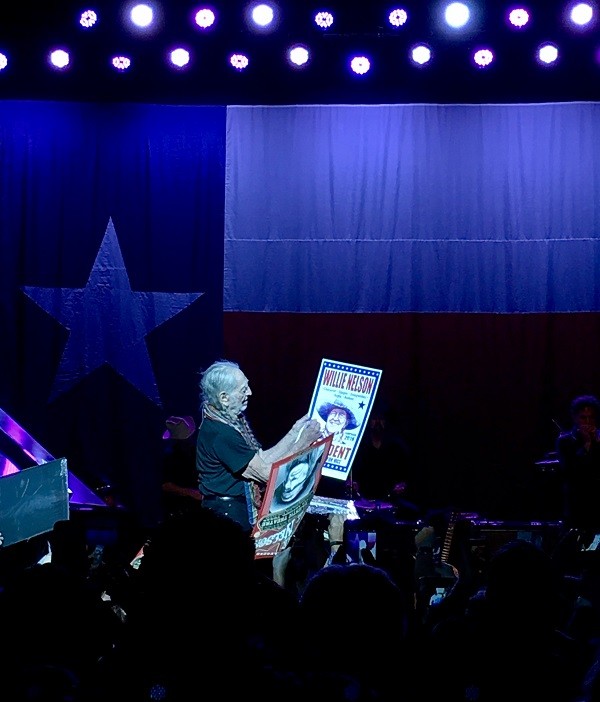 It wasn't a perfect performance, but that didn't stop it from being, for me and so many others, a perfect experience. You better believe that, as I count my blessings over the next few days and cozy up to what's good, forgetting for a while all the strife in the world, I'll think of Willie.