With Death-Defying Stunts, Fire and Lights, P!nk Brought One Hell of a Show to the AT&T Center 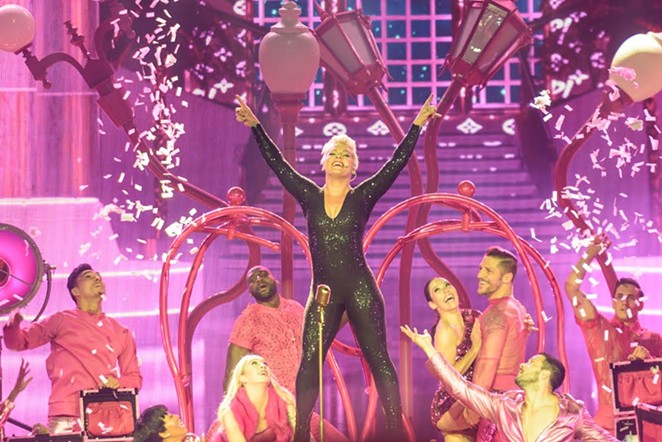 While it's not uncommon for a slew of pop acts roll through the Alamo City every year, P!nk's performance last night at the AT&T Center had a message deeper than choreographed dance numbers and explosions.

Even before the show's opener, singer-songwriter Julia Michaels, was done with her half-hour set, the AT&T Center seethed with anticipation for the headliner to hit the stage.

Swinging from a chandelier in a black sequined cat suit, P!nk, along with a 7-piece band and a troupe of dancers launched into “Get The Party Started,” off of 2001’s M!ssundaztood.

@pink is a boss

We had heard there would be acrobatic choreography during the show, but that didn't prepare us for the singer's Cirque du Soleil-esque feats of bravado, which had her flipping and spinning from ropes. At times all that appeared to keep from falling to her death (or severe injury, at least), was the hands of another performer holding her as she continued to belt it out.

From start to finish, the show pulled no punches, dazzling the audience with an array of fireworks, lasers, fire and confetti, with each song bringing a new set of props. During “Revenge” from P!nk’s most-recent record, Beatiful Trauma, the crew ushered out a 20-foot-tall, blow-up version of rapper Eminem who was featured on the song.

But it wasn’t just showmanship that made P!nk's concert one of the best we’ve seen at the venue. There was the authenticity in the way she interacted with the crowd. She seemed happy to be there, taking the time to wave to audience members and talk to folks who she could see from the stage. Pointing to a guy with a pink beard and hair, she asked, "Did you bleach it first? How did you do that?"

Taking the arena through a two-and-a-half-hour journey through both fan favorites and big hits, the singer radiated a kind of confidence that made if safe to feel different — something she addresses in many of her songs. The performance felt like a rally for weirdos, a pop show for freaks. And even though her medium is pop music, her songs retain a weight and substance that should be classified as art, just with a pop accessibility.