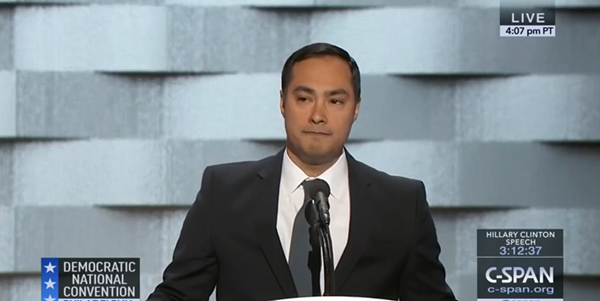 Joaquin Castro finally ended speculation over a possible U.S. Senate run and,  per the Washington Post, even started quietly telling close supporters and donors this past weekend that no, he won't try to take on Ted Cruz next year.

On Monday, Castro made it official in an email to supporters. "I’ve kept my pledge to fight for hard-working Texans, and I’ll keep doing that," he said. "However, with the threats posed by Russia and North Korea, coupled with the reckless behavior of this Administration and their failure to invest in economic opportunity for the American people, at this time I believe I can best continue that work by focusing on my duties in the House Foreign Affairs and Intelligence Committees."

Castro's decision all but ends any lingering worry Texas Democrats would have to slog through an ugly primary fight before launching into their real uphill battle in a general election against Cruz. In case you're wondering how deep the red runs in Texas, a Democrat hasn't won statewide office here since 1994.

There's already one Democrat who's launched full-force into that underdog fight, Castro's colleague from El Paso, Beto O'Rourke, who recently gained some attention with his bi-partisan bro trip across the country with Will Hurd, a Republican congressman from South Texas. O'Rourke has already started hosting meet-and-greet events across the state and compares his scrappy campaign (he vows no consultants, no pollsters, no corporate donations, no political action committees) to that time he was in a band and toured with a member of At the Drive In (seriously).

Basically, this looks like a fight O'Rourke is eager to wage and likely won't back down from in a primary. And as Castro points out in his email to supporters, he's already got plenty on his to-do list — from his positions on the powerful House foreign affairs and intelligence committees to his efforts laying the groundwork for a possible Trump impeachment or helping stage sit-ins on the House floor over gun violence.

Still, Castro likely would have been a formidable contender for the seat. Frequently called a "rising star" in the Democratic Party, last month Castro even got one last bit of encouragement to run in the form of a poll that showed him beating Cruz 35 to 31 percent. O'Rourke and Cruz were dead even in the hypothetical matchup. Castro even threw a "call to action" event in town following the poll, an event that looked a whole lot like a campaign stop. (Also: a whole third of respondents in that poll said they weren't yet paying attention to the race, which is 19 months away. So there's that.)

Maybe Castro really is too busy this time around. Perhaps there's a bit of altruism in his decision — that he thinks the last thing Texas Dems need right now is a contentious primary fight. Could be that he's just pragmatic and thinks the chances of putting a Texas Democrat in the U.S. Senate are still too slim.

Or maybe he remembers that time he was briefly embroiled in another tense primary with another liberal Texas congressman and decided he just really doesn't want to do that again. Whatever the case, it looks like this budding Senate race just got a whole less lot complicated for Texas Dems.