With special session’s end looming, Texas Democrats and Republicans mull their next moves

By Cassandra Pollock and Patrick Svitek, The Texas Tribune 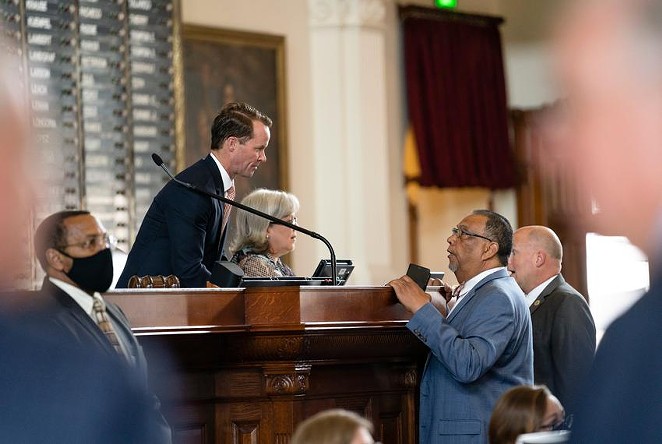 Uncertainty is running rampant among Texas Democrats and Republicans as the final days of the special legislative session dwindle away.

The session officially ends Friday, and lawmakers are already gearing up for a second special session as House Democrats show zero interest in returning from Washington, D.C., and restoring quorum in the lower chamber for this session.

Abbott has promised to call a second special session to pass the GOP’s priority voting bill, but the exact timing is uncertain. Abbott also has yet to detail what other items, if any, he intends to include on the agenda for the next special session. And House Democrats have not yet revealed what they have planned after the session ends this week.

At stake is the fate of the elections bill, which prompted Democrats who object to the legislation to leave in the first place, as well as the livelihoods of some 2,100 state workers and legislative agencies that are set to lose funding next month.

Here is how some of the top players are approaching the final days of the first special session:

Abbott has promised to call as many special sessions as needed to pass the elections bill and his other priorities. He has said he would call a second one to begin the day after the first one ends, though as of Tuesday, it was unclear if he will follow through on that.

If the first one goes all 30 days allowed under the Constitution, it would end Friday, and the next day would be Saturday. Past special sessions typically have started on weekdays.

An Abbott spokesperson confirmed Monday that he would call a second special session but declined to confirm the start date.

In any case, Republican legislators anticipate Abbott will want them back in Austin soon.

“I presume it’s very quickly,” state Sen. Larry Taylor, R-Friendswood, told reporters Tuesday. “I would imagine by next week we’ll be back in session.”

It remains to be seen if Abbott will add to this agenda in the second special session, though one thing is clear — he does not plan to curtail it. He has said he “will keep calling Special Sessions until we address every emergency item,” referring to the 11 issues he laid out at the start of the first special session, such as pushing back against social media “censorship” of Texans and the teaching of critical race theory in schools.


The over 50 House Democrats who left the state in July have been discussing what next steps should be taken as a group as the current special session comes to a close, with members holding hourslong meetings over the past week to consider their options.

Democrats could take a number of routes: They could return to Texas but remain in their districts, head back to the Capitol in Austin, stay in D.C. for the time being or head to another state to continue to prevent a quorum in the lower chamber.

The caucus has remained largely united in both its messaging and numbers since members landed in D.C., where the group has pushed Congress to act on federal voting rights legislation. Since they’ve been there, only one known member of the core group that fled — Philip Cortez of San Antonio — has broken ranks and returned to Austin, only to head back to D.C. soon after.

Democrats have been optimistic about the progress they say they have made with both Capitol Hill and the White House on that voting rights bill, though they have yet to score a meeting with President Joe Biden and have not appeared to move the needle with senators who want to protect the filibuster.

But last week, U.S. Sen. Amy Klobuchar, D-Minnesota, said Democrats could potentially get around the filibuster blockade by integrating elements of the federal voting rights legislation into the reconciliation process of an infrastructure bill that is moving through Congress.

State Rep. Alma Allen of Houston told reporters Tuesday morning that the caucus likely will make a decision on its next steps based on what happens in D.C. over the next three to four days. And state Rep. Joe Moody of El Paso emphasized that a lot could happen between now and Friday.

“I think we’re gonna have a lot of success this week,” he said.

If Democrats did again break quorum in the next special session, it’s less clear what their specific goal would be in doing so. Abbott has said he will keep calling special sessions until the voting bill is passed, and Republicans hold majorities in both chambers.

There’s also the question of whether members have the appetite or funding to carry out another potentially weekslong quorum break, which introduces a number of logistical hurdles for some, including time spent away from families and full-time jobs outside of elected office.

Regardless of what Democrats do next, some members say the caucus intends to stick together.

“The group is determined to stay together,” said state Rep. Erin Zwiener of Driftwood on Tuesday. “When we return to the [House] floor, we will return together.”

Perhaps more than any state leader, House Speaker Dade Phelan, R-Beaumont, has had to consider both sides in the debate that’s ensued throughout the special session.

Phelan has fielded calls from his right flank to reprimand Democrats who broke quorum, such as stripping them of their committee chairmanships. Phelan has said that under current House rules, the speaker does not have the jurisdiction to remove them from such posts.

As punishment for the quorum break, Phelan did remove Moody, the El Paso Democrat, as speaker pro tempore, a position that performs the duties of the speaker in the speaker’s absence. Democrats blasted the decision.

Another question facing House members is how the current impasse will impact funding for the Legislature, which is set to expire Sept. 1 thanks to Abbott’s veto earlier this year in retaliation for Democrats’ initial walkout over the bill.

While the Texas Supreme Court could weigh in, already one House Republican — Dan Huberty of Houston — has asked campaign donors to help pay for his legislative staff, writing that “it requires money in order to fund the budget of a fully-functioning office.”

“I hope you will consider giving any amount you are able to help compensate my team,” he wrote. “Your support is critical for their continued employment.”

House Democrats are also bracing for a potential drop-off in funding. Zwiener, the Driftwood Democrat, told reporters Tuesday that lawmakers are “putting plans together to take care of our own staff,” but urged Republicans to stand up to Abbott and ask the governor “to not use our staffs as a weapon against the Legislature.”

“You don’t negotiate with a bully,” she said, “you stand up to them.”


There is not much Lt. Gov. Dan Patrick and his Senate can do while they wait for House Democrats to come back to Austin.

A group of Senate Democrats initially joined their House counterparts in Washington, but the number of senators was not enough to break quorum in that chamber, and they have since returned.

The Senate has passed legislation related to Abbott’s agenda, but it cannot make it to his desk without a quorum on the other side of the Capitol.

Like Abbott, Patrick is not in the mood for further negotiation on the elections bill and has said it will eventually pass “pretty much in the form that’s in.”

Frustrated with the standstill, Patrick has pitched lowering the quorum threshold from two-thirds to a simple majority and asked Abbott to add it to the next special session agenda. But the idea is a long shot — even if Abbott adds it to the call and Democrats show up for the second special session, the proposal would require a state constitutional amendment and thus a two-thirds vote to pass each chamber.