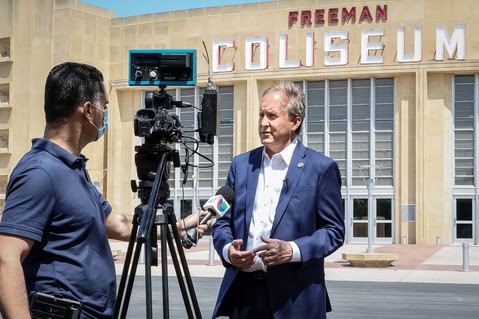 As proof, Paxton, a Republican, linked an article from the far-right news outlet Epoch Times, in which he himself alleged that unaccompanied minors become part of the transnational criminal organization.

Currently, the Biden administration is housing some 1,600 teenage border crossers at Freeman Coliseum is attempts to connect them with family members in the U.S. so they can wait out their asylum cases.

"We’ve already shown from the past that some of these unaccompanied minors end up in MS-13," Paxton said in the tweet.

This week I visited the facility in San Antonio full of 2,000 unaccompanied minor boys. After seeing this, I’m absolutely concerned about the nexus with MS-13, or “Mara Salvatrucha.” We’ve already shown from the past that some of these unaccompanied minors end up in MS-13. https://t.co/ISRRNLk6PS

The AG's claim flies in the face of a Pulitzer Prize-winning investigation by ProPublica that shot holes in the Trump administration's repeated allegations that unaccompanied minors are frequently connected to MS-13.

Over recent years, right-wing politicians and media have used the criminal gang as a boogeyman as they seek stricter immigration controls.

Abbott demanded the Biden administration shut down the facility, saying two state agencies received tips about sexual abuse there. By Abbott's own admission, he'd not yet toured the site and the state hadn't yet begun an investigation of the claims.

Paxton, who's mired in accusations that he abused his office to benefit a campaign donor, earlier this week sued the Biden administration to force it to reinstate the Trump White House's policy of forcing asylum seekers to wait in Mexico while their cases play out.

Human rights groups condemned that policy as inhumane, saying it exposed refugees to abuse by criminals and unsanitary conditions in makeshift camps.