'Wolf' gnaws over sexual predators in church, but fails to tackle the hardest questions 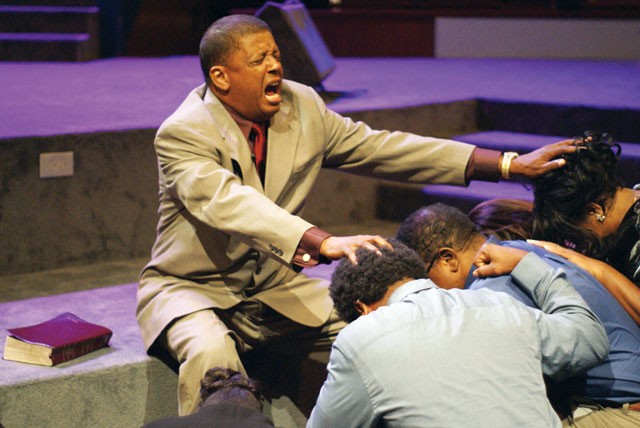 The drama of a dutiful boy abused in church, Wolf was written and directed by a local kid who made good. A graduate of San Antonio's Sam Houston High School who now teaches at UT Arlington, Ya'Ke Smith has earned a string of prizes for his short films (his acclaimed Katrina's Son was shown at Cannes). Wolf, his debut feature, was shot entirely in this city, though, except for an occasional glimpse of the Tower of the Americas, the setting could be anywhere. The main characters are middle-class African Americans, though there is nothing racially specific to their story. As the scandals within Penn State University and the Roman Catholic Church make clear, sexual abuse of boys is a national epidemic. Yet, we seldom see the problem being addressed from an African-American perspective.

In the absence of his father Jaymund (Shelton Jolivette), a long-haul truck driver who is often away from home, Carl Stevens (Jordan Cooper) has developed an intimate relationship with Bishop Anderson (Eugene Lee), the charismatic minister of the church where the family worships. Nona (Mikala Gibson) is a loving mother to Carl, an outstanding student at the church school, but, preparing for a career in psychiatry, she is distracted by her own studies. After a disturbing event takes place, his parents are shocked to discover that for several years their pastor has been molesting their son.

From the raw materials of one of those "problem of the week" TV movies, Smith has fashioned a generally compelling drama. Bishop Anderson is no cardboard Satan. An eloquent preacher and compassionate pastor, he earns the trust of his congregation and the boys he preys upon and is tormented by guilt over his repeated misdeeds. Yet, Anderson is abetted by church elders who prefer blinders to scandal. Even Nona's mother, a formidable old black matriarch played by Irma P. Hall, acknowledges: "These men are just as flawed as us" and counsels: "Don't go putting God's business in the street … Just let it die away, silently." But an irate father would prefer the pastor's death.

As Carl, newcomer Cooper provides an affecting portrait of confusion and fear. The boy both loves and resents the bishop. But, for all its indignation over sexual abuse, the film does little to counter Jaymund's specious equation of homosexuality with pedophilia. Nor does it probe deeply into the basis of religious belief. "God has his reasons for everything," the Bishop assures Nona at one point. Even after Nona and Jaymund have seen enough, their Christian faith remains unshaken and they continue to attend services at the same deceitful institution. A month away from Nona's advanced degree, she, at least, should know better. The painful complications that wrench the lives of the Stevens family are, by the end of Wolf, resolved too glibly.

The film's lupine title is derived from Carl's recurring dream that he is being stalked in the dark woods and from a brief classroom scene in which a teacher explains that wolves are predators. Yet, though wolves hunt in packs, the Bishop is a sadly solitary sinner. Like the manipulative music and the editing decisions designed to accentuate the obvious, the clumsy references to a wolf reduce inspired acting to insipid message-mongering: Do not molest children, and do not enable those who would; positions of authority must never be used as a roost for sexual abuse. We should hold these truths to be self-evident, even without an earnest, disturbing film called Wolf.