Readers responded passionately in this category and we applaud your support of a league that’s just 2 years old. Tonya Hurting of the Prim Reapers claimed top honors, and it seems it’s just another accolade to add to her long list. A Co-Captain of the Prim Reapers, who have jumped out to a 2-0 standing in the 2008 season, she entered the season as one of the league’s top jammers and pivots. She’s known for her speed around the track and it’s definitely reflected elsewhere — a mother of three, they’re collectively referred to as the “fast family” around the track.

Underfunded, über-noble causes abound across the city, but perhaps none get to the root of the matter as directly as the San Antonio Food Bank. With nearly one in five of us living beneath the poverty rate in SA, the Food Bank does bang-up business, delivering 1.8 million meals every month to about 40,000 area families. Named Food Bank of the Year by America’s Second Harvest, SAFB may be a stop to put on your volunteer to-do list. Heck, with the most recent economic reports on joblessness trends, they may be on your shopping list before long. 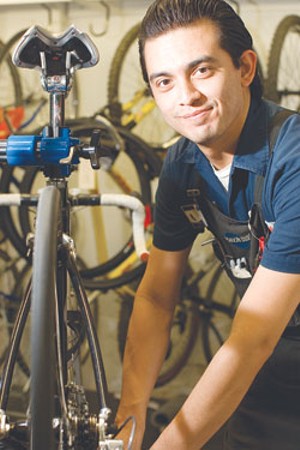 A trip to Bike World for a repair is always an educational experience. No piece of bicycle knowledge is too rare for Carlos. Nothing is too complicated that it can’t be explained. With Bike World and Carlos you know you are in good hands.  Quality service becomes the expectation. The unexpected is the conversation and exchange of ideas that transpires in the shop, often random but intriguing: a discussion of the best fajitas in town, politics, the best bike route to take to Helotes, an ode to Sandbar’s key-lime pie, a discussion of steel versus carbon frames … anything is fair game. Perhaps this is why so many cyclists are always hanging out there.

A trip to Bike World for a repair is always an educational experience. No piece of bicycle knowledge is too rare for Carlos. Nothing is too complicated that it can’t be explained. With Bike World and Carlos you know you are in good hands.  Quality service becomes the expectation. The unexpected is the conversation and exchange of ideas that transpires in the shop, often random but intriguing: a discussion of the best fajitas in town, politics, the best bike route to take to Helotes, an ode to Sandbar’s key-lime pie, a discussion of steel versus carbon frames … anything is fair game. Perhaps this is why so many cyclists are always hanging out there.

A couple of years ago, the conventional wisdom was that Spurs guard Manu Ginobili had hit the downside of his career, a case of a player who recklessly threw his body around on the court and had become old at 28. If last season didn’t convince us to re-think that position, this year left no doubt. With Tony Parker battling injuries and Tim Duncan sliding gracefully into elder-statesman mode, Ginobili took charge and brilliantly carried this team to another playoff berth. Forget his All-Star snub. Manu received the important recognition: He’s your choice as SA’s premier athlete.

Under Texas law, the completion of a defensive-driving class allows the dismissal of one traffic ticket per year. Even if it’s better than a violation hitting your driving record, anyone who’s sat through a defensive-driving class can tell you what a drag it is. San Antonio’s Comedy Speed Relief, formerly known as That’s The Ticket, counters your doldrums by joining a rising wave of schools whose classes are taught by professional comedians. Jay LaFarr and Danny Ingle garnered slots one and two, respectively, and both are instructors at CSR. LaFarr, who said he moved to San Antonio to get away from his ex-girlfriend who lives in the comedic hotbed of New York, is a stand-up comedian who tours more than half of each year and has been teaching at CSR for four years off and on. “I try to keep things upbeat,” said LaFarr. “We have to cover all the material, but try to make it so it’s not the mind-numbing awful experience that we all know.”

Just to recap, 210er: “Whose streets? Our streets!”
I know it sunk in at the International Women’s Day march and rally, but you know how things wear down and off. Well, local attorney isn’t letting forgivable mortal lethargy hinder her contest with the City of San Antonio over the Right to March, Speak, and generally have Constitutionally-Protected Livingness an’ stuff. Representing the Free Speech Coalition and a mélange of non-profs, Kasteley got the case against SA’s parade ordinance past and present before a federal judge and on the road to a fall trial. More than a few of you wrote in to salute her for her pro-bono gift to local democracy.

You’d think that touted GPS and computer-dispatch system would prevent incidents in which you watch your bright-yellow airport lift cruise by a few blocks down, while the dispatcher you’ve anxiously rung up explains that the cabbie can’t find you. OK, that happened to the Current once, but you, SA, must be having better experiences, or the number — a stroke of simplistic brilliance — is just the easiest to remember when you’re drunkies and need a cab that seats six to haul you and your five new best friends from Retama to Coyote Ugly.

Located on the corner of Dewey and N. St. Mary’s, Gigabites and Java is a bright-yellow building that’s more than likely caught your eye before. But the wonders it contains within! The gaming/computer repair/deli/WiFi hotspot was the first genre-bending locale of its sort, owned and run by an exceedingly friendly and knowledeable pair of brothers, Roman Lopez and Brandon Day. While Day is most often the face of the operation, Lopez is the bug-squashing computer tech. Gamers enjoy hubs for XBOX 360, Playstation 3, and high-speed PCs, while computer repair and upgrade questions are directed toward Lopez, who charges no diagnostic fee. The full-service deli caters to everyone, containing all Boars Head meats and cheeses, and a lunch package of a sandwich, soda, and one hour of gaming will run you $8.95 + tax.

There really are three boys at Beyer: Perry, Pat, and Jeff. Make that four, at least. Brother-in-law Brad Dawson handles the PR. The Beyer Boys do HVAC and construction work, among other things, but the plumbing side of the business, run by Perry, has been around the longest, since 1990. “It’s kind of like being married. You choose your battles,” says Perry, the oldest of the crew.The Beyer Boys are Fed-approved, too; last year they worked on the FBI building. What makes them stand out from other pipes outfits? “I would say same-day service,” says Dawson. “Within a window of two or three hours, we can get to somebody.” They really are 24/7, too, and if those pipes burst in that surprise Thanksgiving thaw you won’t pay extra for the call. Beyer Boys flat-rate pricing also means that if that leaky beeswax ring turns out to be a cracked fitting, you pay the original estimate. “We try to do the best job we can,” adds Perry. “That’s what’s gotten us wehre we are.”

San Antonian Larry Good’s 24-year-old electrical business prides itself on its ability to “get things in the walls” without disturbing your sheet rock or messing up your floors. Good worked as a builder previously, so he “knows how homes are built.” His firm also specializes in motor controls, complex jobs for waterworks and other major industrial operations. A master electrician, Good will cheerfully explain the origin of such arcane-sounding terms as “journeyman” (“It kind of goes back to the old feudal system ... ” Ask him; it’s interesting). His crew is background-checked and drug-tested, too.

Most Honest Foundation Repair
Perma-Jack San Antonio by Meinhardt Stabilizing, Inc.
1418 Bitters Road
(210) 545-3939
permajack.com
Paul Wolf lived next door to the people who patented the Perma-Jack system in St. Louis, Missouri, and in 1979 he bought the patent for San Antonio, knowing full well what he was getting himsef into in those lovely historic neighborhoods — that 22-feet high-water mark by the Quarry Market is basically the cutoff for any kind of consistent bedrock foundation, Wolf says. That’s why in these parts, the company promises that they’ll drive those steel piers down to a “load-bearing capacity strata.” It works like a charm for concrete-slab homes, even those in infamously porous Alamo Heights and Terrell Hills.

I’m guessing that the red neon ant off I-10 at Vance Jackson brought in the votes for Worldwide Pest Control. Though the 20-year veteran warrior against urban nature has instituted “green” options for its customers recently, I would have liked to see more votes come in for Tom Delay (1), Mafia (1), or even a foot (1) and Jaco, the dog (1). Too fun. But before you douse that fire-ant hill with a pound of toxics, consider loosing some disappearing horny toads. Someone would eat those stinging buggers if you let them — though it may take dedicating a corner of that turf to a more natural habitat.
Kermit Bless You.

Wasn’t that long ago that Best Buy got busted for selling in-store merch at one price but offering customers online inventory access to marked-up stock. If the electronics titan hadda been a car lot, the practice would never have made the news. There’s a reason car dealers have the rep they do. But you’re not about to get taken at a Gunn lot, thanks to the “One Simple Price” mantra that eliminates haggling and manipulative sales shakedowns. By taking commissions out of the equation, you can save your copper stock for that glass-pack muffler and dizzy rims.

OK, all I can say is, this Tony guy must really kick ass. For starters: his garage is way the shit out in Hill Country Village. (I didn’t even think our papers were dropped that far out of the Loop…) Number two, Tony’s suavitos of rusting radiators and gunked pistons operate out of a suite. Apparently. With my spider sense a’twangling, I was gonna check this pick out personally, but I fell back on a little MacGyver trick I know involving an eight-track motor, 17 pipe cleaners, and some glue sparkle, and my Nadine’s running like her old self again. At $3.25 a gallon, I’d hate to waste anyone’s time. Know what I’m saying? But Tony, if the sparkle don’t stick, I’m stickin’ with our readers and making the voyage north.

Located along the upscale Stone Oak strip, Cigar Club is a worthy destination for young professionals. The loungy atmosphere boasts a rotating crop of musical talent and a nightly drink specials up the ante, but the club’s claim to fame is still its full-service humidor. Owner Jacob Larkey could easily be one of his own patrons — in his mid-20s, Larkey relates to his target audience and imparts an energetic and youthful outlook to his growing business. Larkey’s strength lies in his involvement with the entire process, from separating cigars and booking the lineup to running the joint. A San Antonio native, Larkey was preceded in ownership by his mother and Cigar Club founder, Kandis Larkey, and it’s obvious he believes strongly in creating a unique vibe for the city’s hip set.