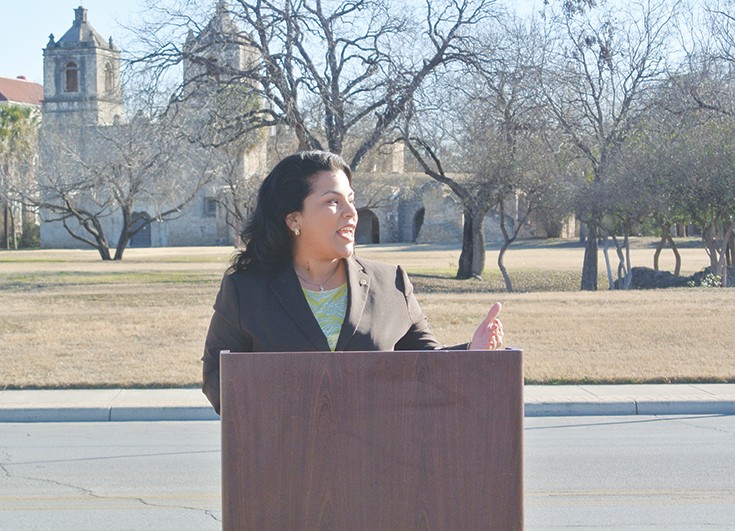 South Side Councilwoman Rebecca Viagran is no stranger to the delicate dance of placating developers while protecting her constituent's interests.

She took heat for how she handled the removal of renters from the Mission Trails mobile home park last year to make way for high-end apartments — though she convinced the developer to provide financial help to displaced people.

Roughly half a year later, Texas' first World Heritage Site is in her backyard. More development, along with a probable increase in tourism, is imminent.

Missions Concepción, San José, San Juan and Espada are in Viagran's district. The historic sites, along with the Mission de Valero, aka The Alamo, were granted World Heritage Status by the United Nations in early July.

Viagran couldn't be more proud of the prestigious recognition, which highlights the South Side, an area undergoing revitalization after neglect due to the city's northward expansion.

"Now, when some people were feeling very overlooked — disrespected in other areas and ways — we had UNESCO, the world, give us recognition. They recognized all the work that we've done," Viagran told the San Antonio Current last week. "I believe that District 3 does represent the heart and the soul of the real San Antonio, if you will."

Yet she's aware it's not a fait accompli, since the prestige could be stripped away.

"This is not something that I won't do all that I can do to make sure it's not put in danger, peril or jeopardy," she said.

But putitng a halt to all new development near the Missions, however, isn't a realistic. And World Heritage Status is expected to bring more economic opportunities to District 3.

That boon is impossible without development, which can be tricky, particularly now that the world has recognized San Antonio — and the South Side — for its preservation efforts.

Earlier this year, the last residents of the Mission Trails mobile home park — a 10-minute walk away from Mission Concepción — were forced off the property to make way for a luxury apartment complex.

"I think that whole conversation is going to be different if that were to ever happen again ... the whole thing will be different because of the city council housing committee and the housing commission the mayor has established," Viagran said.

Those nomination fears never became reality, but that doesn't mean a similar situation won't arise down the line.

So it's crucial to keep in mind that it's just about the people as much as it is the place.

"We still have to tell the stories of our communities and the character of each neighborhood because they all tell a story together ... and the neighborhoods around it are very unique and distinct," Viagran said.

And as developers move in, Viagran will have to balance the need for development with maintaining World Heritage Status with developers eager to move into the territory.

That's where the Mission Protection Overlay Zoning district factors in. It provides regulations to protect the integrity of the San Antonio Missions. Those rules were approved last year.

"It was part of our nomination process," Viagran said, referring to the zoning requirements. "And it passed their test as well."

However, concerns about new development around the Missions popped up quickly after San Antonio learned about the prestigious designation.

The 210 Developers group is planning to build at least two apartment complexes in the area — one at the Mission Marquee Plaza and another in the former St. John's Catholic Seminary. A third proposal at 131 Huizar is still in the works.

"I am going to err on the side of caution and I'm going to be very careful as we move forward with whatever development comes around this area," Viagran said. "And so, that's really my mindset. But to stop any and all construction near the Missions? I think that would be doing ourselves a disservice."

For instance, Viagran said she would like to find ways to get more coffee shops and restaurants that reflect local flavor in the area. There are sidewalk and infrastructure improvements that need to be done. She would also like to see more residents opening up small businesses. And more public art is a plus, she said.

But there are certain types of development that Viagran said are unacceptable.

"Anything industrial is something that we are going to keep off the table," she noted.

Balancing development with local integrity near the United States' 23rd World Heritage site isn't going to be a cakewalk and the potential for controversy is ripe.

"We are now getting opportunities in District 3 that we had not been getting for a long time," Viagran said. "So we need to be very cautious and diligent about going forward."

However, one thing is for sure: World Heritage Status ushers in a new chapter in South Side history and, hopefully, future international visitors will take back home with them a positive perspective about this traditionally overlooked and underserved area of our city.