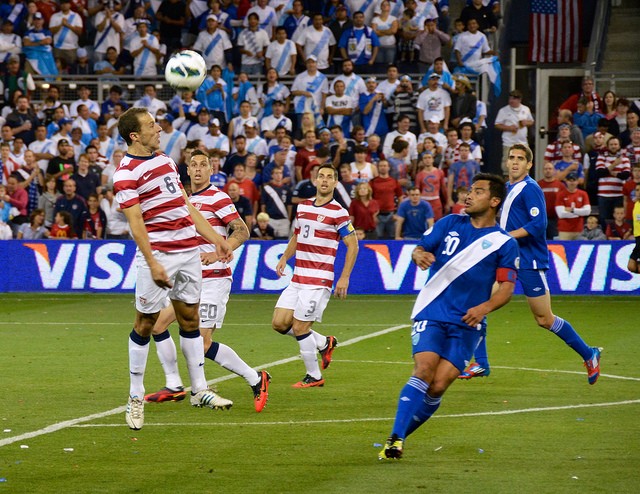 FIFA officials have some explaining to do.

The U.S. Department of Justice unsealed indictments today against 14 officials from the world’s governing soccer body, charging them with a slew of corruption and conspiracy-related offenses.

FIFA has long faced allegations of corruption. And let’s face it — when you regulate the world’s most popular sport, some folks will do whatever it takes to get a piece of the action.

FIFA officials are charged with soliciting over $150 million in bribes and kickbacks since 1991. In exchange for cash, they allegedly awarded marketing rights and tournament bids to sport executives across the globe. If convicted, the officials could face up to 20 years in prison.

Attorney General Loretta Lynch laid out the allegations in a press conference this morning:

“The indictment alleges corruption that is rampant, systemic, and deep-rooted both abroad and here in the United States,” Lynch said in a statement. “It has profoundly harmed a multitude of victims, from the youth leagues and developing countries that should benefit from the revenue generated by the commercial rights these organizations hold, to the fans at home and throughout the world whose support for the game makes those rights valuable.”

On Wednesday morning, many FIFA leaders were at a swanky hotel in Zurich, Switzerland for an annual meeting. That’s where Swiss law enforcement, in cooperation with U.S. authorities arrested seven of the defendants, with plans to extradite them to the U.S.

Of the 14 defendants, four are U.S. citizens. But Sepp Blatter, president of FIFA, was conspicuously missing from the indictment list.

Walter de Gregorio, the chief communications officer for FIFA, said in a press conference that neither Blatter nor Secretary General Jerome Valcke were involved in the allegations. But there’s speculation that the indictments aren’t over, and Blatter could be in the crosshairs of investigators.

Separate investigations will also be launched into the bidding process for the 2018 World Cup, won by Russia, and the 2022 World Cup, which will be held in Qatar.

Who knew that awarding the tournament to a country with a horrific human rights record, no soccer history to speak of, and summer temperatures that exceed 110 degrees Fahrenheit may not have been on the up and up?

Come on FIFA — you can't even legally drink in Qatar.

To reflect on happier soccer times, take a look at this Shakira video for the 2010 World Cup.


See? Shakira is happy! She’s dancing with South African people! Messi has long hair! Nothing to fret about, FIFA. Everything is ok.