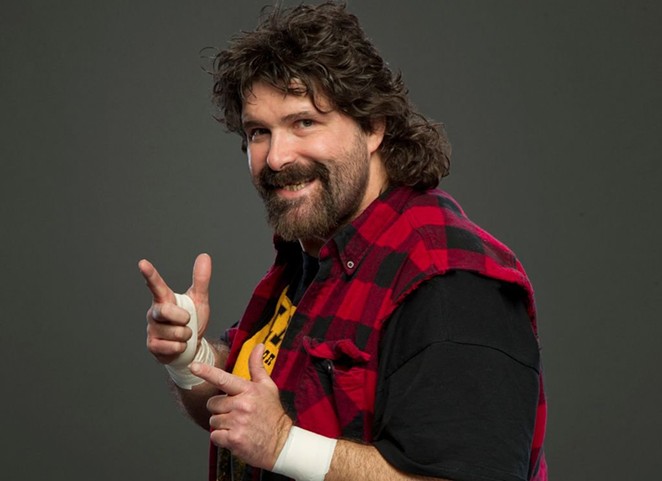 “You sound surprised,” Mick Foley remarked after I told him that his hour long stand-up comedy set was good. The hardcore legend was right, his performance at the Rivercenter Comedy Club wasn’t what myself or anyone in attendance expected.

The man formerly known as Mankind isn’t quite a comedian, not just yet. His show leans closer to storytelling, infused with your father’s corny humor and a bit of an edge. He wouldn’t speak badly of anyone, refusing to trash anyone’s name like other comedians. He only used the F-bomb once all night, a fact he took great pride in.

For example, Mick confessed to being very anti-George W. Bush until attending a New York Jets game on September 11, 2011. All it took was the 43rd president of the United States waving at Mick and saying his popular in-ring catchphrase “Bang! Bang!” to turn him into a fan of the former leader of the free world. This taught him, he said, that he didn't want to be like other comedians by making fun of people he didn't know personally like celebrities or politicians despite his personal feeling on them.

Some of the more comical stories involved Foley trying to get a room full of 2,000 impoverished Indian children to laugh with a reference to Larry David’s HBO comedy, Curb Your Enthusiasm, which the adolescent audience deadpanned accordingly since they had no idea what he was talking about.

Another funny bit relied heavily on irony, with Foley criticizing his son Dewey’s “man-crush” on NFL quarterback Tim Tebow only to reveal that he too had a “man-crush” on award-winner actor George Clooney, discovered after former WWE Diva Stacy Keibler asked him to suggest wrestling matches to show her then-boyfriend.

A fun fact that got plenty of laughs out of the audience was that WWE Chairman Vince McMahon demanded Mick played a masked character when he came to the WWF in 1995 because he believed his face looked “seedy.”

The night concluded with a question and answer session where the 4-time WWE Champion fielded questions about the current wrestling product to questions about how he felt about being on “Celebrity Wifeswap,” to what was on his mind shortly after regaining consciousness following his infamous fall from the top of the cell in his 1998 Hell in a Cell match with The Undertaker. Nearly two hours after the show ended, Foley was still signing autographs and taking pictures with fans for free. Who would have thought that the only wrestler to use the catchphrase, “Have a nice day,” would be so caring and polite?

“No one came through bigger when it mattered less,” Foley joked on-stage about his track record of having death-defying moments in matches at minor events compared to high profile ones like Wrestlemania. This much is true as no fan would complain if it turned out that Cactus Jack wasn’t that funny yet Foley surpassed all expectations. His show was not what I was expecting in all the right ways with easy to digest humor that the whole audience could fully understand. In or out of the ring, Mick Foley appears to be a talented entertainer whether he’s writing books, acting in film or telling jokes behind a microphone.