From Joni Mitchell to Taylor Swift, it’s no surprise when a musician writes a song about a breakup to help them find closure. Filmmakers, however, rarely get the opportunity to share their experiences of a failed relationship unless they are, well, actually making a movie that includes a failed relationship.

Such is the case for writer/director Ari Aster (Hereditary) with his second feature film Midsommar, an abstract exploration of the end of a relationship he experienced five years ago. The horror film, which is much more symbolic in nature than an average “breakup movie,” follows a troubled couple (Florence Pugh and Jack Reynor) during a trip with friends to Sweden to attend a fabled mid-summer festival. The festival, which only occurs every 90 years, turns out to be operated by a pagan cult.

During an interview this past weekend with the Current, Aster talked about his intention in writing a breakup movie like Midsommar, his frustration with some mainstream horror and why he’d rather leave interpretation to the audience.

You’ve been open in recent weeks about how you wrote the script for Midsommar after experiencing a breakup. Was there something specific you wanted to say about the kind of pain you went through during that time?
Yeah, I went looking to do a breakup movie that felt as big as a breakup feels. From anyone else’s perspective, it’s a minor enough event. If it was a relationship with any real consequence, then a breakup can be cataclysmic and turn your life upside down and almost feel like a death. I wanted to make a big, operatic breakup movie that felt and played as consequential as the end of a relationship feels to the parties involved.

Without revealing too much information, does this person you experienced the breakup with know you’ve written a movie based on it?
I don’t know. I imagine they might have some idea. I can’t imagine they’d be happy about it. But it’s not about them or the relationship itself. It was written as I was piecing through the ruins of that relationship. 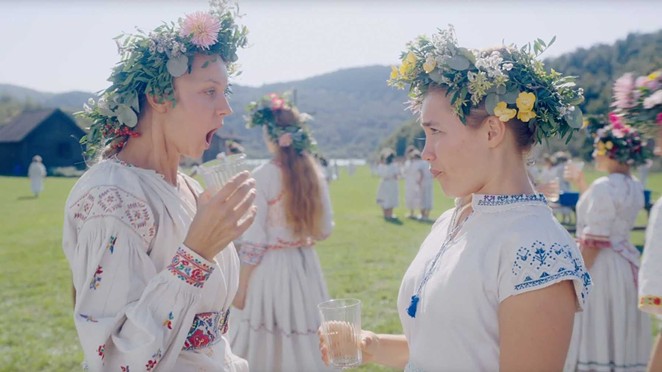 When you write something as twisted as Hereditary and Midsommar, do you find that people tend to think the person creating the stories must also be twisted? I’ve talked to horror directors in the past that think it’s difficult sometimes for people to separate the creator from the material?
Yeah, but that's an occupational hazard. I’ve made peace with it.

Some of the imagery in both Hereditary and Midsommar stays with you long after the credits roll. Is that a goal as a horror director?
Yeah, if you make a horror movie, why not try to make an impression on people? I have my own taste. I’m not somebody who’s into jump scares. I feel like everything we see day to day is infused with dread. I enjoy building suspense and also creating a mood. I’m somebody who is more affected by images and ideas than I am by jolts.

That must be frustrating, especially since those are the kinds of horror movies mainstream audiences flock to the most.
They kind of irritate me. It’s just a matter of taste. I just don’t watch them. That kind of filmmaking is frustrating to me, but I also don’t do it or watch them. I watch all sorts of movies and I hope to make all sorts of movies. [Hereditary and Midsommar] are just my contribution to the horror genre.

Do you mind explaining to people what your movies are about or would you rather them come up with their own meanings and ideas?
I’m a pretty firm believer that what’s in the film is what you need to know. I’m happy to answer people’s questions to a point and I’m honored that people want to talk to me in the first place. I’m very fortunate to be making these films, but ultimately, I’d rather not explain anything. I’m more than happy to talk about influences and what drives certain things and give some insight into what inspired me to dive into this work, but I try not to be too insufferable in my explanations.

Looking to the future, what kinds of films would you like to make – if not horror?
I’d love to play in every genre. I love romantic comedies. I love Westerns. I love musicals. I love sci-fi. I try to come to everything from a place of character. That’s my way in. Genre filmmaking offers you a structure and a framework. From there, you can play around and find a way to add your signature.