WTF? These bills could actually become law in Texas 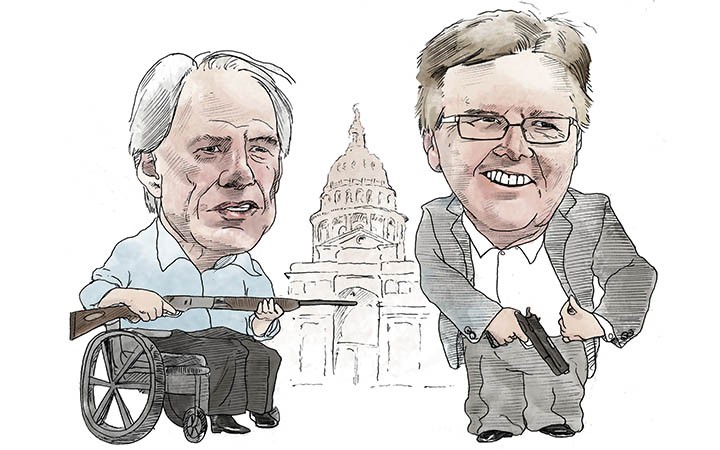 Have you recovered from the whirlwind November midterm elections? Good. Because the 2015 legislative session starts in a mere matter of days, and with our newly elected governor and lieutenant governor, and a solidly Republican Texas Legislature, expect nothing less than a proverbial shit show of meaty red legislation and epic debates.

Despite the decades-long Republican stronghold on the Capitol, bills such as the ones we've highlighted below proved to be a bit too much, either going nowhere fast or ultimately defeated later in the session. But with unapologetically ultra-conservative legislators, shored up by Lieutenant Governor-elect and Tea Party favorite Dan Patrick and Governor-elect Greg Abbott, it wouldn't surprise anyone if some of these become law next year.

After defeating Democrat Wendy Davis in the race for Texas' top leadership position, Abbott wasted no time announcing he'd sign a bill this legislative session to allow the open carry of handguns. "If an open-carry bill is passed by the House and Senate and arrives at my desk, I will sign it into law," he pledged November 5, the day after he won. "If open carry is good enough for Massachusetts, it's good enough for the state of Texas."

Forty-four states allow some form of open carry, and believe it or not, Texas isn't one of them. Of those states, 31 don't require a license or permit to openly carry a handgun. Recent efforts to codify the concealed carry of weapons on college and university campuses, led by former Republican State Sen. Jeff Wentworth, who represented part of San Antonio, have been struck down thanks to opposition from higher-ed institutions and students.

Several lawmakers are chomping at the bit to get this done once and for all. They had pre-filed six bills as of press time. CJ Grisham of Open Carry Texas believes the November election results are a "mandate" to pass such legislation in 2015.

"The idea is we're going to return our Second Amendment rights," Stickland told the Associated Press. "I can't imagine what the citizens would do if they had to take a class or pay a fee to use their First Amendment rights."

In the wake of school shootings and other incidents across the country, gun-control advocates nationwide want more oversight of the sales and purchases of guns, including universal background checks for consumers. Claire Elizabeth, with the Texas chapter of Moms Demand Action for Gun Sense in America, said Texas' current gun laws are too lax and the state should do more to ensure public safety.

"Our elected officials' focus should be on restoring the responsibilities that go hand-in-hand with gun ownership and ensuring that guns are not getting into the hands of criminals," she said.

Taking a page from Arizona's playbook, San Antonio Republican Rep. Lyle Larson has once again filed a bill that would make it easier for counties to house inmates in outdoor tents rather than in prison buildings. Larson's bill is inspired by Maricopa County Sheriff Joe Arpaio's now-infamous and controversial "Tent City" jail—introduced more than 20 years ago in Phoenix—where inmates reside in tents with no air-conditioning in the summer and no heat in the winter. The Department of Justice has ruled that jails run by Arpaio discriminate against Latino and African-American prisoners.

After repeated requests for comment, Larson was unavailable to speak to the Current by press time, but he told San Antonio's conservative Newsradio 1200 WOAI that these so-called tent cities cost less and lack the "amenities" available in brick and mortar jails.

"There is no entitlement to have TVs and air-conditioning and all the amenities that folks have in our jail facilities," Larson told the radio station. "I think, in fact, some folks re-offend specifically because the jail gives them a better setting than what they have outside of jail."

Current Texas law allows counties to set up tent jails for no more than three years as a short-term fix for overcrowding or building damage, with approval from the Texas Commission on Jail Standards. Larson's bill would allow counties to bypass TCJS approval and use tents indefinitely.

Ana Yañez-Correa with the Texas Criminal Justice Coalition said her organization has opposed Larson's legislation in the past.

"We are looking at how policies will have an impact in the long-term. Given that counties can already do this and there are safeguards to be able to do so under certain circumstance, the bill is not only unnecessary but can result in greater cost to taxpayer dollars," Yañez-Correa said.

Need Cash Assistance for Your Kids? Get in Line for Your Drug Screen

State Sen. Jane Nelson, R-Flower Mound, has once again filed legislation that would require adults who apply for the Temporary Assistance for Needy Families (sometimes called cash assistance)—including those applying on behalf of children—to undergo a drug screening before receiving benefits. If the applicant fails the screening and/or has committed a felony, next comes the full-on drug test. If the adult fails the tests, the law provides a way for children to receive benefits through an individual dubbed a "protective payee" in the bill.

Fewer than 80,500 Texans receive cash assistance, primarily children. For those that do get support, benefits are scant. The average monthly benefit is $76, with benefits maxing out at $188 per month.

According to the National Conference of State Legislatures, 11 states have passed similar bills. In 2013, Nelson essentially proposed the same bill, which passed out of the Senate but ultimately died on the House floor. This year, after being charged with studying the proposal in the interim, the Senate Health and Human Services Committee, which Nelson previously served as chair, sees this as one of many requirements to impose on applicants to "further improve the integrity of the program." Senate Democrats on the committee, however, are already raising concerns that such a requirement would jeopardize children's access to benefits.

"While instituting compliance requirements may appear to save the state funding on the front end, depriving a child of a healthy upbringing will cost the state in the years that follow in the form of increased healthcare costs, mental health expenses, and, in some cases, in the criminal-justice system," committee Democrats wrote to chairman Sen. Charles Schwertner, R-Georgetown.

"A review of the TANF program structure should have considered how we can encourage participation among those who are eligible. ... Based on current participation levels, Texas has a long way to go to ensure those children are receiving the services we aim to provide."