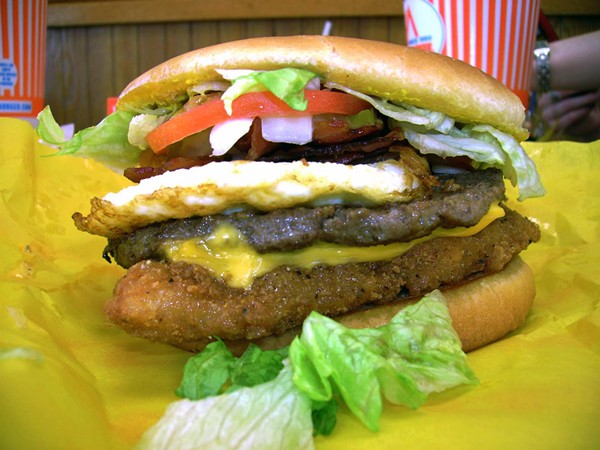 Yesterday on our Facebook page (facebook.com/sacurrent), I made a passing reference to the Whatafarm on a post about In-N-Out Burger's secret menu. To my surprise, some of our readers have never heard of this majestic creation. So here's an opportunity to introduce or reacquaint yourself with this fast food behemoth that's sure to confound the orange-clad Whataburger employees behind the register.

In a sense, the Whatafarm is a hamburger, but it's also so much more. It's a stomach-turning, yet surprisingly delicious special menu item that is sure to put you on the fast track toward your first heart attack. You know how Whataburger lets you customize your order any which way? Well some mad genius decided to test that promise by special ordering a hamburger that contains every protein the fast food chain has to offer. The Whatafarm traditionally contains a hamburger patty, bacon, a fried egg, a breaded chicken patty and cheese, in addition to the lettuce, tomatoes, pickles and diced onions that make for a balanced diet. Here's a handy diagram. 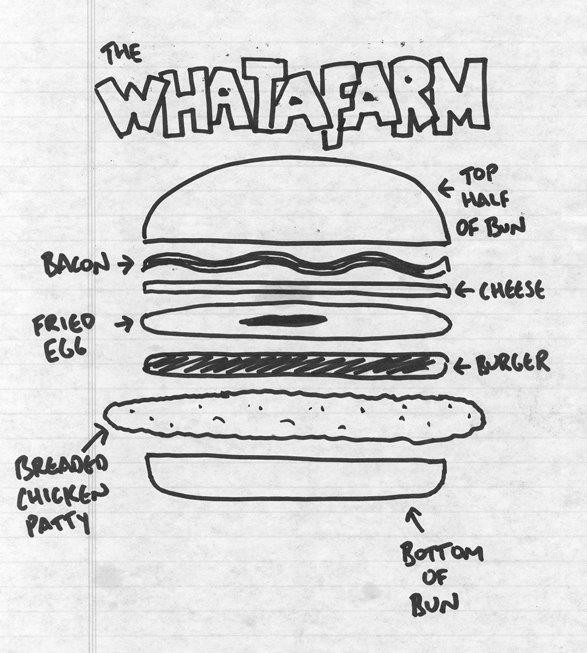 The special order hamburger has somewhat of a cult following online. It even has a Facebook fan page. The above diagram helps when ordering. When you say, "Whatafarm," at the register, you might encounter an uncorrupted Whataburger employee who has no idea what you're talking about. Variations exist. You can throw caution to the wind and request a breakfast sausage patty or fried fish patty because you have a death wish.

Because when it comes to fast food, people are insane. That is not necessarily a good or bad thing, it's just the reality of the world we live in.

How much does it cost?

Well, that depends on exactly how you customize your order, but when I tried a Whatafarm one sad, sad evening, the sandwich came out to around $15.

Is it any good?

It's not bad, actually, once you get over the hamburger's presentation and the fact that eating one brings you one step closer to a myocardial infarction. That doesn't mean I would ever eat one again.

How many calories are in that thing?

So go rush to Whataburger, and order a Whatafarm, but don't come after me if it turns out to be your life's biggest regret. You should also know the Whatafarm is not the only Whataburger secret menu item. You can find more at ranker.com.