For a lot of local art lovers, "kid-friendly" might not be the first thing one associates with contemporary-art mainstay Artpace. And that's probably one reason people love it. In a city obsessed with family events, Artpace, a downtown oasis for challenging works by up-and-coming local and international artists, is almost defiantly adult.

And the defiant adults who patronize the organization for its heady artist talks and swanky gatherings may also casually overlook an annual Artpace festivity that generally lacks both free booze and a foreign-born curator holding forth on Lacan's concept of the real. We're talking about Chalk It Up, Artpace's very kid-friendly daytime pachanga. The event, which features dozens of artists and students creating ephemeral chalk drawings and installations along Houston Street in the heart of downtown SA, is tied into Artpace's substantial arts-education arm.

"It's a definitely a family event, but it's a street festival and there's vendors and there's food and there's music and there's the local businesses up and down Houston," says Roberta "Nina" Hassele, who's returning to curate Chalk It Up's 19 featured artists for the third year in a row. Aside from featured artists, there are also school teams in the "Team Works" section and San Anto-style blue chippers, like Cruz Ortiz and Ethel Shipton, as "showcase artists." And if Chalk It Up is cool enough for them, it's cool enough for you. As Hassele mentioned, there are also performances, installations, workshops by the likes of Mobile Om yoga, food and music. "The first time I went was without my son, and it was great," said Hassele. "I love seeing the art that people create, it's so beautiful and so out of the ordinary from what they do. People love it. I'm not talking about tourists, I'm talking about San Antonians." And if you can't bear the thought of attending an Artpace event without an adult beverage in hand? Hassele slyly suggests that there are plenty of places downtown to get a Bloody Mary on Saturday morning. For more advice, we turned to four participants from this year's Chalk It Up.

Have you participated in Chalk It Up before?
I participated last year as part of a group of UTSA graduate students. Justin Korver, Alyssa Danna and I all worked on a collaborative project that involved birds and feather boas. It was so much fun last year, I was happy to be asked to participate again this year. I love seeing how excited all the kids get about first seeing art, then grabbing their own chalk and immediately being able to make something of their own. There is so much sort of joyful, creative, chaotic energy about Chalk It Up.

The characters in your more recent work have been described as "verg[ing] on the grotesque." Do you feel any pressure to tone down your style when you're creating for a kid-focused event?
I had an image of a young girl on a flyer [for a recent exhibit], she had a cauliflower head, furry monkey legs and sweet little kid arms; it was based on a story I read about a young girl with cancer of the salivary gland, and the way this changed her physically. As adults, we might call this image and story grotesque. But children see the image as simply new. "Why did you put a cauliflower for her head?" "Why does she have furry legs?" My answers are pretty simple, and the kids, they just get it. I say, "The[se images] are about people who have bodies that aren't perfect, or are a little different. But I still think she's beautiful, don't you?" And they do! Or at least that's what they tell me.

Is there a little part of you that wishes your Chalk It Up piece could be made permanent somewhere, somehow?
No, I really like the impermanence of it all. I think that takes a lot of the pressure off as an artist and ... it's part of the joyful freedom of the whole day. Plus, I have plenty of permanent work in the studio, it is nice to be participating in something beautiful and fleeting. 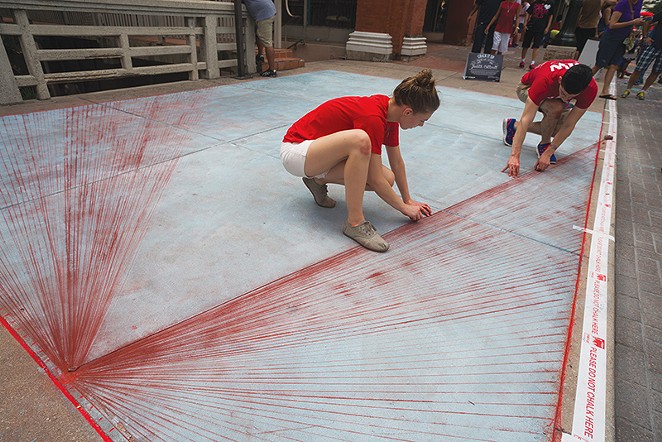 Guerilla Haiku did a "residency" with Artpace that culminated in Chalk It Up in 2013. What did you learn about the city and the event then?
I spent two days in San Antonio passing through on a Texas haiku tour. I had heard of Chalk It Up and wanted desperately to meet the organizer. Through a lot of hilarious finagling, I tracked down Kaela Hoskings (former director of education at Artpace) at an intramural volleyball game and convinced her to bring Guerilla Haiku to Artpace for 2013. She agreed and lent me her car and a space on her couch to make 2013 possible.

What I learned about San Antonio in that week, and what I rediscovered last year (and am sure to see again this year), is that this is a city that commits to using the arts for community building. ... It is such a joy as an art maker and community builder to spend time in cities across the country that recognize the potential for art to connect their urban communities, and San Antonio reinvigorates me with its energy whenever I spend time here.

What's a really memorable Guerilla Haiku experience that you've witnessed?
One that keeps haunting me from an event in San Antonio happened in 2013. I was haikuing with GirlZone, an after-school program organized by the Martinez Street Women's Center. These 4th to 6th grade girls were tremendous at getting people to write with them and at the end of our time together, Brenda — a young and fearless approacher-of-strangers — pulled me aside to ask me very seriously, "Miss, if my mom gets me chalk, can I keep writing haiku in my neighborhood with my friends?" I responded, "Brenda, you can do this whenever you want." This response earned me the biggest hug I have received from anyone ever. This year, due to funding from Awesome SA, Guerilla Haiku is heading back to GirlZone. I hope to touch base with Brenda again and see how her haikuing has been going.

Is it difficult to get passers-by to create proper haiku? Are you surprised how many people know/don't know what a haiku is?
I think the most surprising thing for everyone that participates is how easy it is to get people to write haiku. Volunteers believe that they will have a hard time convincing folks to play with them. Often people don't know what a haiku is, or need a refresher, but we use haiku because of their structure and simplicity of form. Kids who are just learning to write, and folks who consider themselves vehemently not poets are successful in this form — and therein lies the magic.

What do you think the permanent or lasting effects of a Guerilla Haiku event are on a city?

But on this street, the voiceless heard

Have you participated in Chalk It Up before?
Yes, this will be my third year supervising youth as part of Team Works, and it will be my second year as a featured artist. I teach at New Frontiers Charter School, and we have taken a team for the last couple of years. Our students are constantly engaged in dialogues about self, lived experience and voice. As part of that conversation we are continuously seeking vehicles and formats for self-expression. Chalk It Up has become an exciting space for our students to share their voices and consciousness with the public. As a featured artist last year I was honored to work alongside my students. Their Team Works space [and] my featured artist space were right next to each other, allowing for generative conversations between students and spectators. I felt pride in watching my students create and the opportunity for them to watch my process as an artist was powerful. My classroom serves as a space for students to create critical consciousness about themselves and each other, and Chalk It Up operates as an extension of that space.

You aren't afraid to address questions of classism in your work. How do you think free public events like Chalk It Up address class issues and art in practice, if at all?
"Access" to art is an issue that is constantly present when considering the role of creative expression in society but specifically in working-class communities. As artists — and in my case, as an educator — we have a responsibility to produce spaces that creatively and critically engage communities that have been historically marginalized. Oftentimes the notion of "community" is strategically invoked allowing for the commodification, commercialization and consumption of "community" art without critical consciousness. It is important that we create spaces that facilitate dialogue, exchange and access allowing for tangible processes to create this work so as to include a multiplicity of voices, lived experiences, interpretations and translations in our communities.

You also work as an art educator to bring creativity to underserved populations. How might that inform your Chalk It Up piece?
My work facilitating spaces of teaching and learning directly informs my process as a visual artist. It is important to state that I don't "bring creativity" to our youth who are already brilliant and creative. Although I support the development of tools and skill sets for the expression of their developing voices, the teaching and learning is reciprocal. Dialogue with youth and community challenge me to consider pedagogical theories and practices, identity development, self and collective consciousness, movement, reflection and healing.

What would you say to art patrons who plan to skip Chalk It Up because they think it's a kids' event?
Our youth are producing powerful work, and there are many amazing professional artists producing beautiful work. To witness the two in conversation with each other fosters a profoundly critical space along Houston Street.

Is there a little part of you that wishes your Chalk It Up piece could be made permanent somewhere, somehow?
I appreciate the photos taken during the event. I think they create a perfect archive of the work produced and the process of its production.

Is Chalka Khan something you've done previously?
Chalka Khan is based on the drawing toy Spirograph [the beloved invention that uses spinning gearwheels with pens or pencils attached to create geometric drawings], which I played with often as a kid, and now I have my very own 5' x 5' version. It's been to several birthday parties, a kids-only meet and greet for my wedding and family-day events at local museums. This will be the fourth time Chalka Khan has made an appearance at Chalk It Up.

Does Chalka incorporate the mediums you typically work with, salvaged wood and other items?
You're thinking of my scrap monster stuff. This machine is made from high-grade birch plywood and a bicycle wheel, tire and grips.

Between this and working with the DoSeum, are you starting to look at kids as a particularly appreciative audience for your work?
Always have. For some reason small mammals seem to like me.

Is there a little part of you that wishes your Chalk It Up piece could be made permanent somewhere, somehow?
I think there should be one in every children's museum and science museum. I'm taking orders!

What would you say to art patrons who plan to skip Chalk It Up because they think it's a kids' event?
Come out and make a Chalka Khan print. Give it to a niece, nephew or anyone else who might like it. You'll be awesome!