You Me at Six Preview New Album at the White Rabbit 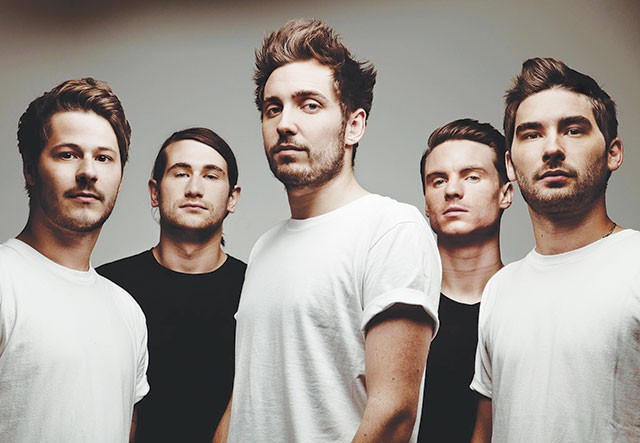 It’s no secret where the band’s from, as if frontman Josh Franceschi’s thick accent wasn’t clue enough. Or maybe it’s their teasing about American quirks—like our gun laws—with a hint of jest. You Me at Six, a pop punk band whose fifth studio album comes out next year, holds mother country England dear to their hearts, but the lads are ready to conquer the U.S.

The group hopped onto any tour they could here for almost three years before headlining a full U.S. tour in 2011 to promote their third studio album, Sinners Never Sleep. Their Blink 182- and Incubus-influenced sound had already garnered fame in the United Kingdom with the 2008 debut album Take Off Your Colors. However, You Me at Six weren’t strangers to the grind of being an up-and-coming band. It took four years of steady gigging before their 2008 singles “Kiss and Tell” and “Finders Keepers” took off on the British charts. That kind of determination, and the help of the fan base gained through being Van’s Warped Tour veterans of two years, helped set the band up for across-the-pond success.

You Me at Six’s most recent U.S. tour (last spring, with All Time Low and Pierce the Veil) set the bar. Fans came early to catch their set, even though they were the first of four bands to perform on the tour and it was their first time back since Warped. The group, which had just headlined London’s Wembley arena months before in December 2012, didn’t skimp on account of their opener status, providing fans with the energetic shows that helped get them recognized as British rock mag Kerrang!’s 2011 Band of the Year.

Recently, You Me at Six announced that they would be releasing their fifth studio album, Born To Be A Band, in early 2014. Meaning: this fall tour could be the last chance to hear some of your old favorites. But don’t worry too much, while the all-ages event at the White Rabbit will be a final hurrah in SA before their next anticipated album, there’s a good chance fans will get a preview of the new songs, too.

You Me at Six feat. Cute is What We Aim For, Conditions, Dinosaur Pile-Up