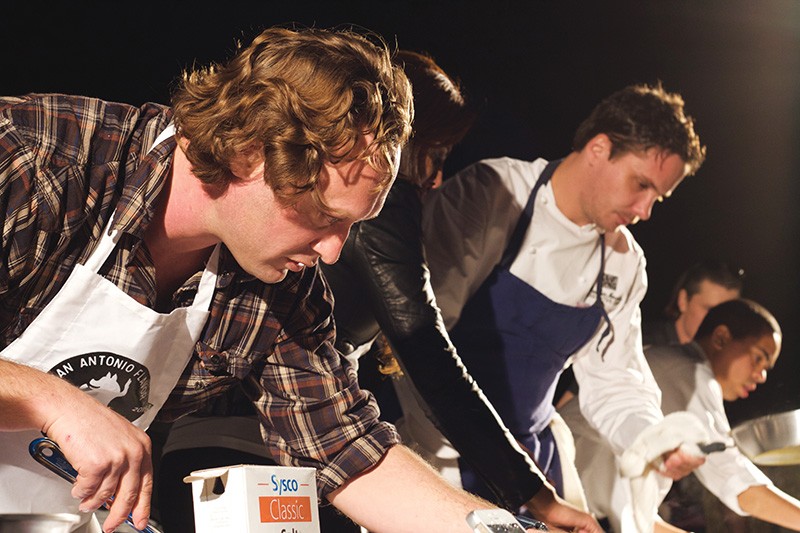 Top Chef's Tom Colicchio has one. Cronut creator Dominique Ansel has one. So does Austin's Paul Qui. By this time on Monday, one of four chefs working in eateries in the Lone Star State (among them Aaron Franklin of Franklin Barbecue, Bryce Gilmore of Barley Swine, both from Austin, Hugo Ortega of Hugo's and Justin Yu of Oxheart, the latter two in Houston) could be the owner of a James Beard Foundation Award — the Oscars of the food world.

And for the second year in a row, no local chef made the cut. San Antonio is absent from semifinalist nominations.

The foundation honors the "dean of American cookery," who pioneered food programming and culinary culture. As it gears up to celebrate its 25th awards ceremony (in Chicago for the first time) on May 4, SA chefs can take the consecutive snub in one of two ways: as a huge blow to a burgeoning scene, or an emphatic call to action for chefs and restaurants eager to be recognized for their innovation.

But the endeavors extend much farther than your local chef cooking badass plates. After February's list of semifinalists was announced, Jason Dady didn't hide his emotions.

"It's certainly disappointing. The reality is our food culture is on solid ground and only getting better. Chefs like Stefan, Jesse, Steve, Diego, Robbie, Johnny, to name a few, are cooking food in restaurants that are as good as any in Texas," he wrote in an email. "As a city, we need to speak up and get the voice out there. Pretty simple really. Anyone can nominate chefs, pick your favorite and help us put the SATX food scene on the national map once and for all. Soapbox. Out. "

Indeed, anyone can nominate their favorite chefs for the chance to score insane bragging rights, a bronze medallion and all the perks that come with being named the top of any category.

The JBF awards collect nominations or call-to-entry in mid-October, taking names up to the December 31 deadline. More than 38,000 entries were submitted for the 2014 restaurant and chef awards. The JBF restaurant and chef awards committee, made up of food writers and critics (Texas Monthly's Patricia Sharpe is the Texas rep) then has the monumental task of whittling down entries to 20 semifinalists. Category winners are selected by a panel of more than 300 previous JBF winners, as well as 250 judges in 10 regions and 17 members of the subcommittee.

So how do local chefs replicate — nay, surpass — the magic of yesteryear, when they made the semifinalist stage? Who will be the pioneer of a new cuisine à la Bruce Auden in the mid-'80s? Auden, known for his impish and playful plate, has seven semifinalist nominations to show for it, including an Outstanding Service nod for Biga in 2013.

Andrew Weissman has a couple of wins under his belt for Best Chef Southwest while David Gilbert and Michael Sohocki each have one. And Dady's nomination for Outstanding Restaurateur in 2012 could see a repeat as he strengthens his lineup with the newly-opened Tre Enoteca and the upcoming Shuck Shack.

The nomination process is relatively simple, but the San Antonio dining scene might still have some waiting to do to regain and surpass previous achievements. Luckily, we won't have to go hungry while we do so, as shiny new knives head into the kitchen (Mixtli's Diego Galicia and Rico Torres; Quealy Watson and John Philpot of Empty Stomach; David Arciniega and Joel Herrera of Amaya's Tacos, Luis Colon and staff at Folc; Steve McHugh, Tim Rattray and Jeff Balfour of the Pearl; and Best of San Antonio chef Pieter Sypesteyn, to name a few) and slightly worn ones drive the charge.

For Karen Haram, who witnessed first-hand the rise of the previous successful generation of SA culinary leaders as former food editor of the San Antonio Express-News for the better part of 30 years, the city's going to need to grab a louder megaphone.

"The growth of the food scene in recent years in San Antonio has been phenomenal as an influx of new talent has joined existing restaurateurs to take restaurant and bar offerings to a new level. Now, the word needs to get out, and that's not easy in a state that has three other food-intensive cities competing for culinary attention. Putting the word out means getting culinary influencers to the city, as James Beard Awards rules state that in order to vote for a restaurant, judges must have eaten there," Haram said via email.

"So to get nominations, we need more than just great restaurants, chefs and bartenders. We also need an audience — regionally, certainly, and preferably nationally — that is aware of what we're doing here."

Leading the way in that effort is SA's Convention and Visitors Bureau, which is targeting millennial travelers these days.

"We're strategically trying to increase awareness and enhance their visitor experience. Millennials are traveling more aggressively, and when they come into some money as they enter the workforce, they like to be mobile and very experiential," said Richard Oliver, CVB's director of communications.

To zero in on this demo, the CVB has reached out to chefs and service industry professionals to form a culinary task force to expand on foodie offerings in the city. The bureau is planning to host more than 300 reporters from across the world this year to try to raise the city's dining profile.

To better understand what a James Beard nomination means for our local chefs, the San Antonio Current sat down with two leading fine-dining chefs, Robbie Nowlin of Citrus and Stefan Bowers of Feast, to learn what else the city as a whole can do to take the city to a higher level.

For the sweeter side of things, we sat down with pastry chefs Kat Sees of Folc and Jessica Perez of Hot Joy to gain insight on their creative process and why you'll want to try celery-lime ice or pig blood merengue.

To quote the puppet wisdom of Yoda, "Do or do not. There is no try."