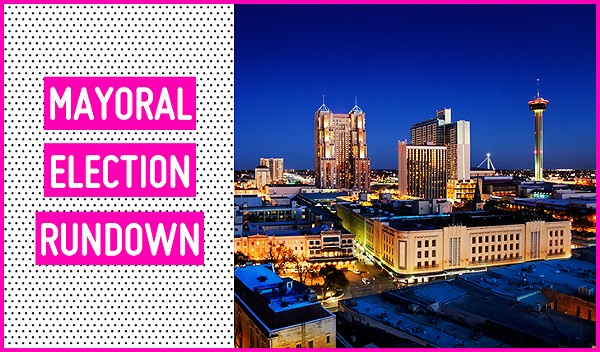 You've watched the debates, you've seen the lawn signs, you've argued about it on Facebook — and now it's finally time to cast your vote for San Antonio's next mayor. And have a whopping 14 candidates to chose from. Before you head to the polls May 6 (or vote early before May 2), take a good hard look at who's in the running.

Below you'll find the occupation of each candidate and a recent quote from them, straight from the campaign trail. To learn more about their platform on their campaign website, click on their name (some of the candidates don't have a website).


Ivy R. Taylor — Incumbent Mayor. "San Antonio will succeed when all young people are seen as a resource, and not a problem. Our people — ALL of our people-will support our economy, the expansion of businesses, and perhaps the creation of entirely new industries.”

Ron Nirenberg — District 8 City Councilman. "You deserve a city that listens to you, that treats you with respect, that spends your tax dollars responsibly and openly. You deserve a city whose leaders are ethical and accountable and a mayor who has a vision for a bright and successful future."

Antonio "Tony" Diaz —  Director of the Texas Indigenous Council. "I have a political outlook that in order to have a just social and economic system all segments of society must be involved in their local government representation.

Keven Roles — EMS educator. "I believe my 27 years of EMS, real life experience and my faith will be enough to improve the City of San Antonio and to enact change for everyone who calls it home by providing a safe, secure environment and improving the resources we desperately need to better the quality of life for all residents."

Rhett Smith — Retired Navy. "I want to play an active role in making my community, state and country a safer, better place to raise my children, run my business, and forge a future filled with unlimited promise.

Manuel Medina — Chair of Bexar County Democrats. "Together, we will find solutions to problems that have plagued our City far too long: Generational Poverty on the Westside, Institutional Violence on the Eastside, Nightmare Traffic on the Northside, and Neglected Infrastructure on the Southside."

Will McLeod — Security staffer. "Elect Will McLeod for Mayor and let's drain the swamp!!!"

Stephen Lucke  — CEO of Gardopia Gardens. "With my knowledge and experience of the city infrastructure, leading organizations, and inspiring and connecting with others, I will enact policies that will represent and carry forth the desires of the people, vitalizing both our city and its inhabitants."

Napoleon Madrid — Retired entrepreneur. "[I] will change the face of humanity while creating millions of jobs worldwide that in a collective possesses the potential to the trillions of dollars in estimated total revenue."