Hailing from Mexico City, Inés Estrada has become a staple in San Antonio’s zine scene because her work — raw and colorful illustrations, stickers, pins, clothing and just about everything else — brings something new to the table.

As the previous editor of Tebeo Tropical, the comics column of VICE Mexico, and a long-time comics illustrator, Estrada is no rookie. She’s a self-taught cartoonist whose work has been published in VICE and The New York Times, along with several other publications, including Fanzinología Mexicana 1985-2015, a compilation of zines and comics from Mexico, which she also helped edit. 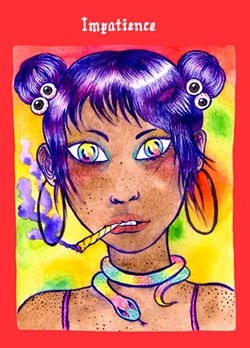 Though she’s only lived in San Antonio for a year, Estrada has created a strong presence at local galleries, zine events and artist pop-ups. More often than not, you’ll see her behind a table, offering a plethora of prints, pins, comics and T-shirts, all with a unique aesthetic that seamlessly translates between mediums. She co-organized Zine Nite at Second Saturday  this past June, which brought together over 25 illustrators, designers, artists and zine creators for an event dedicated to exposing all that San Antonio’s DIY scene has to offer — and if you were there, you saw that San Antonio’s zine artists have plenty to give.

Including Estrada, whose collection is both wide in variety and large in volume, which might be why her table attracts so much attention at events. Her work is rich in color, original in style, authentic in presentation and her illustrations are easily recognizable for their eccentric style and overtly feminist themes.

Recently, Estrada has been traveling through Mexico and South America to promote her latest project, Impatience, a self-published collection of comics that she created between 2012 and earlier this year. During the book tour, she’ll stop in San Antonio for a release party on Oct. 21 at High Five Shop, a store on the St. Mary’s strip that was created to promote a network of local artist, often including pop-culture and SA-centric imagery.

We last talked with Estrada at Pan Dulce Gallery during the La Liga Zine Anniversary Party, where she was tabeling with other locals like Chiflada Zine and St. Sucia. Though she’s too humble to admit to the obvious success she’s had over the years, she says any and all attention her work has received is because of the support that local zine artists give to each other, and the number of ways that digital platforms, whether through Facebook, Instagram or Twitter, give exposure to DIY artists. It’s a community that wants to see other artists flourish and it’s what keeps Estrada going.

You can check out more of her work at inechi.com and purchase some rad stickers, zines, pins and illustrations on gatosaurio.com.