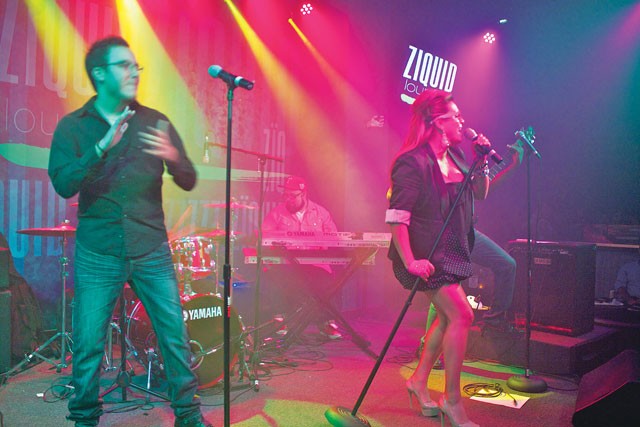 There's a long history of using the umlaut to impart credibility, though it's traditionally wielded by metal bands (Motörhead, Queensryche, Mötley Crüe) to convey a sense of Germanic power, or by ice cream companies (Häagen-Dazs, Frusen Glädjé) to suggest an exotic gustatory adventure.

Much as I wish it was inspired by the former, I think it's safe to say that Zïquid Lounge, with its clear plastic chairs and aquarium lighting and unusual menu, harkens to the latter. Its logo is a green splat, which I think must be a reference to some kind of zïquidity, possibly radioactive. That splat, though, is about the only landmark by which you can find the club, which is entirely hidden in a nook of that endless labyrinth, Stone Oak. (I don't think people so much move there as go for a visit, get lost, and have to settle down.)

In any event, it's in there, somewhere. Hunt for it. The interior, for all its eccentricities, is worth a look. Zïquid isn't quite an ultra-lounge; it's too small (maybe an extra-lounge?), and feels smaller due to the blue-lit floor-to-ceiling curtains on the walls enclosing the space. With this claustrophobic drapery comes the suggestion of privacy and exclusivity. All in all it seems ideal for a burlesque show. Everyone's got a view of the stage, in other words, hence the constant rotation of live music — cover bands, Latin, soul — and karaoke. As my companion pointed out, Zïquid seems modeled after a Vegas lounge: a dark place with a loud band and random food. The food in this case is sushi, a direct import from Zïquid's sister, Sushi Zushi. And while this seems like a terrible idea after five whiskey-rocks, tucking into the good-looking menu earlier can be a fine way to start an evening. If club fish isn't enough of a lure, they have happy hour until 9 p.m. and nightly specials that will keep you planted in those see-through seats (refer to "five whiskey-rocks," above).

People love this kind of place, and there's a lot of love put into it, so...

Listen: forget all the chic curtains and nocturnal sushi, giving a damn is really the only thing that counts. Unfortunately, Zïquid also turned out to be the sort of place that accidentally charges you twice, and then when you call them to reverse the extra fee, they say they'll get on it, and promptly don't — even when you call back a few days later. Zïquid needs to pay attention to the little stuff as much as the big stuff. Because right now it's like the girl I saw that night with the bright silver zipper up the back of her skirt: it's unnecessarily flashy. Why do you need a zïpper when a zipper works just fine? •

Best Use Night out with friends, first date, singles hot spot, but count on yelling over the band or not saying much, sexily.