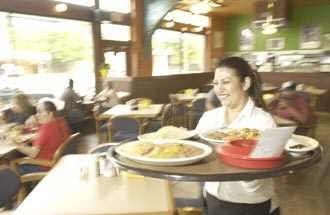 
"Taco Haven was crowded the way it always is Sunday mornings, full of grandmothers and babies in their good clothes, busy with hair still wet from the morning bath, big husbands in tight shirts, and rowdy mamas slapping rude children to public decency." from Sandra Cisneros' "Bien Pretty"

When Jerry Torres and his wife Edina opened a small mom-and-pop Mexican joint called the Taco Hut on South Presa Street in 1969, they didn't know there was another restaurant by the same name on nearby Goliad Street. When Jerry discovered the duplication, they searched for a new title. "We wanted something that meant people could feel relaxed, somewhere you would feel at home," recalls the 70-year-old patriarch of the immense Torres clan. Eventually, they decided on Taco Haven.

Ask 77-year-old Pauline Patnode, who has been eating as many as three meals a day at Taco Haven for 30 years, and she'll call it both a heaven for the food and a haven for the company. Patnode, who runs ABC Tailor Shop just a few doors north of the restaurant, like many who live and work downtown and on the near South Side, probably lost a few pounds the weeks Taco Haven closed this spring for remodeling. "It was horrible," she exclaims. "Sometimes they would bring me some tacos from one of the other stores `Havens No. 2 and No. 3`, but it was just horrible that I couldn't go there."

From the packs of artists recovering from First Friday weekend debauchery with Sunday migas to Brackenridge kids skipping class to CPS guys making the rounds, Southtown was a neighborhood in withdrawal. It was also worried. There is a strange and fierce loyalty among San Antonians for a chosen spot for carne asada, and Taco Haven is a place where loyalty runs deep. How dare they change? Will they get fancy? Will the prices go up? Rest assured that these days Patnode is back in her favorite booth before 8 a.m. and, by most accounts, all is well in TACO COUNTRY (as the giant mural still proclaims on the side of the building).

More spacious, but warm, Taco Haven has deep terra-cotta walls and the original tin ceiling revealed above the newly tiled floor. The massive wall of windows creates a movie screen on neighborhood activity. The always clean — but strange smelling — bathrooms of the past are a hundred times improved, and huevos rancheros (I prefer scrambled eggs, extra sauce, and thick homemade corn tortillas) are still $1.99 on weekdays. Indeed, it appears that through countless tacos, immense personal tragedy, and a huge renovation, the Torres family has survived intact — even smiling.

With double the seating capacity, the place is still packed to the gills on weekend mornings. "They are all here you know, all walks of life," says Jerry. "I just stand back and think 'This is what the world is supposed to be like, people sharing food together.'" Jerry recalls standing back at a different restaurant more than 50 years ago, DeWese's Tip Top Cafe, where he was a busboy. "I would look up at Mr. DeWese. I thought he was the nicest man I'd ever met. He would have a smile for everybody. I thought, 'That is what I want to be like, Mr. DeWese.'"

It wasn't an easy journey. Jerry's son, Jerry Jr., remembers, "We grew up here. I'd come in with my dad and he'd let me help him and let me drink coffee. I'd go get the barbacoa but the best part was him letting me drink the coffee. They were here, all day, all night." Jerry Jr. is the oldest of the seven Torres kids. For years, middle brother Mark was a neighborhood fixture at the register. He was murdered in 1997, an event that the youngest Torres, Reggie, says galvanized both family and community. "We had all kind of drifted apart, doing our own thing, and when we lost Mark, we all just came together and remembered what was important."

Now just like Mama and Papa Torres used to, Reggie and Jerry Jr. and his wife Olga nearly live in the restaurant. Olga designed the new kitchen and menu, which has added a few Tex/American dishes like chicken fried steak and burgers perfect for the day when everyone wants Mexican but you. The new Mexican tortas ($3.99) do just what tortas should, ooze out the sides and make a mess. Mine had a good inch of guacamole on a fresh roll topped with cheese, shredded lettuce, onions, and tomatoes. My friends swear by Ralphie's Special ($4.00), a plate of three small chicken tacos on corn tortillas, but their 2-year-old Bygoe is a purist; papa y huevo and frijole y queso on flour.

One morning as I sat talking with Pauline over a steaming tender plate of nopalitos, Sandra Cisneros (whose character Lupe preferred the Torres Special Taco, a fabulous clog your veins concoction of papas con chile and chile con queso for $1.75), pops in the new Take Out door for something to go.

One definition of the word haven is a harbor or a port. From the looks of it, Taco Haven faithful have re-docked happily and found an old and improved place to call home.