The taste remains the same 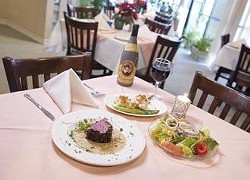 
There ought to be a statute of limitations for posting reviews in restaurants; unlike evaluations of movies or books, there is a relatively short shelf life for these transitory treatises.

A good case in point is Mesón European Dining. Upon entering the restaurant recently, I noticed a review I had written years ago for the San Antonio Express-News still prominently posted in the window; on leaving, I paused to read it. The surprise was twofold: I was reminded that the menu hadn't changed much in the intervening seven or so years; and I had automatically ordered many of the same things the second time around. One of us has got to get a life.

Here is where it gets sticky: Some of the comments - both pro and con - still apply. (So much for the transformative power of criticism.) But whereas I found Mesón to be charmingly retro in the mid-'90s, it now seems merely stodgy - with some exceptions, to be sure. There is no need to fix a richly favored French onion soup that is still one of the best I have had outside of Paris. What does need to be fixed is Mesón's use of this quote from the old review to imply that all the food rates the same raves. It wasn't accurate then; it's even less so now.

Let the re-evaluation begin with Béchamel. The simple sauce mantles an appetizer order of baked artichoke hearts, and as such, the menu description is perfectly accurate. But the hearts appear to have come straight from a can, and although the resulting dish isn't overtly offensive, life is too short for food so faceless. We can say the same for the creamy potato soup that was an evening's special. Visually monochromatic, it managed to taste like a total cipher. Perhaps the company of the robust onion soup was unfair competition, but it is hard to imagine that even on its own this soup would have shone.

Another appetizer, one that I had selected on that previous tour of duty as well, fared much better. Tri-colored tortellini now give this dish with scallops and cheese sauce a more appealing look, and the taste remains pleasantly spunky-cheesy. There were all of two scallops on the entire plate, however, and at the risk of sounding like a bean-counter, two is too stingy. Tortellini also come with bacon in a creamy "souce" - in which case no counting should be necessary. Shrimp cocktail, a blast from the past, and calamari "frito," which Mesón was among the first in town to popularize, are among other appetizer options.

Mesón's menu sports a Features insert, and it was from that list that we chose pato con vino with "simmon" stick. The duck came not in the currently fashionable fan, or paillard form, but in three, sturdy lumps that could as easily have been thigh as breast. This surprise turned out to be a good one, however; although the skin was a trifle tough, the duck had been perfectly cooked to a highly desirable medium-rare, and its onion-accented sauce was rich and rewarding despite a a certain oiliness. Simmon stick was nowhere extremely obvious - which is probably a good thing.

Mesón is not alone in its use of pretty, but boring vegetables as an accompaniment to entrées; the trio here was yellow squash, broccoli, and carrot, and it needed seasoning. There is an option with the starchy sidekicks, however, and both proved to be good. Tri-colored (a theme of the evening) noodles were perfect with the duck's sauce; a cheesy-crusty potato creation was fine in its own right.

The potatoes (and more yawn-inspiring vegetables) shared plate space with charbroiled Norwegian salmon marinated in dill and zinfandel and served with a Bearnaise sauce. Dill and zinfandel were hard to detect in the finished product, but the salmon was appealing regardless; it flaked dutifully and had more genuine flavor than much farm-raised fish. It could have used a little anointing, however, and here is where expectations came a cropper: The Bearnaise was totally bogus. It looked and tasted liked butter whipped with a few stingy herb fragments. None of the punch of the shallot, vinegar, and wine reduced with tarragon and pepper that give this classic sauce its appeal was there. So here is another kind of appeal to any restaurant striving to hold high the standard for traditional, Continental cooking: Please let it be the real thing.

Bananas Foster, on the other hand, is an American classic, created at Brennan's in New Orleans more than 50 years ago. Since we know the source, this is a dish with well-defined parameters, but a little fiddling is probably fine regardless. The tableside preparation at Mesón includes orange juice and white wine, not a part of the original, and the bananas are sliced into rounds, not lengthwise, leading to a more sauce-driven result. Rum and banana liqueur are added and flamed, as they should be, and in a particularly pyrotechnic touch, our waiter tossed ground cinnamon (or simmon?) into the still-flaming pan for a show of sparks. My final comment? The same as it was last time: It is messy and unnecessary, to share a dish that inevitably involves melting ice cream. How hard can it be to divide this into two servings? Mesón attracts customers ranging from military retirees having a get-together to women in chic suits to borderline bubbas in jeans and Adidas. There is live music from an especially impressive grand piano on Tuesdays and Thursdays. Apparently, there exists an audience responding to the idea of chicken in Grand Marnier sauce and pepper steak with Cognac currently being offered. But frankly, the place is tired. With a little tightening up, an entirely new audience - that silent majority out there yearning for food that's truly fine without too much fuss - could be at the door.