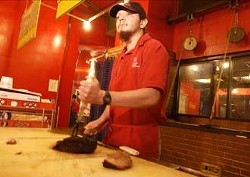 But wait: Maybe this wasn't another instance of the breakdown of civil behavior; perhaps these kids were performing a kind of primitive, protest ritual. Not so long ago, Selma was a blip along I-35 distinguished only by its reputation as a speed trap. Today, strip-center sprawl is lapping at Selma's shores: Retama Park, after a seemingly shaky start, has paved the way for other worldly entertainment venues such as the Verizon center; and the old city hall, wherein the wheels of government were once greased by the fines of feckless motorists, is becoming a Hooters. No wonder the natives were restless.

Into this cauldron of crass, contemporary commercialism has just been plopped the third local branch (there is also one in Albuquerque) of Rudy's Country Store and Bar-B-Que, with its self-proclaimed "Worst Bar-B-Que in Texas." A primitive protest of my own is now in order: Unless the bellwether brisket improves markedly, this tongue-in-cheek claim is in danger of becoming more fact than ad-copy fiction. Dry, boring, and even visually unappealing, the purported pride of Texas "Q," came alive only with liberal lashings of Rudy's famous (and famously sweet-sour) "sause."

The luck of the draw might have been at work, of course; a small sample (and the friendly staff is more than willing to give samples) of Doc's Southern Style Pork was more flavorful than the full order of the peppery, pulled pork we were seduced into trying, suggesting that a quarter-pound serving sometimes gets short shrift. (A serious bun is called for; the pasty white "bread" that is your curse with all orders doesn't hold up under the assault of small pieces and lots of lubrication.)

Pepper looms large in just about everything but the sides and the sausage at Rudy's. It's the only discernible seasoning on the sliced turkey breast, an item I normally order only reluctantly on the grounds of its perceived yuppie-come-lately qualities. Delicately smoky and adequately moist, this turkey was worthy of serious consideration - no (or very little) sauce required. Meaty and also moist, the pork ribs could be gnawed on their own as well; the sauce only adds mess in this instance, I'd venture.

If you're easily distracted by cavorting kids, all of the above and more can be had at Rudy's "'round back" takeaway at all three San Antonio locations (the original Leon Springs outlet and one in Westover Hills are the others). Reheating at home would be a potential virtue with the creamed corn, in any case; amazingly, it might have been my favorite side had it only been served warmer. This doesn't say much for the beans, although they were a notch above the barbecue norm and didn't require sauce to relieve the tedium. Yet they weren't the worse for a squirt or two from the bottle you'll find on each picnic table. One diner developed an active dislike of the pickle and pimento-studded potato salad; let's call it neutral. The cole slaw is crisp and fresh-tasting enough to pass the muster of most.

Rudy's not-so-hot sause, a recent variation on the original, is likely to attract opinions - both pro and con. One of our servers was not a fan, and she admitted it. "Too sweet," she said - and she was right. The original may be too tart for my palate, but it's much to be preferred to the toned-down version. A little dab'll do ya on the sturdy, juicy sausage, even less will suffice on the chicken. (Chicken often seems like a copout, but here it's a flavor-packed paragon of the pitmaster's art.) The baby back ribs, altogether unlike the sauce-slathered product to be had at most ribs-first joints, are another test of smoking skill. Rudy's are plain almost to a fault, but the light boost of oak is just enough to accentuate the pork's inherent flavor. You decide how much to anoint this one; less-is-more is this eater's opinion.

Less cinnamon and clove would be a relief in Rudy's only dessert, peach cobbler, but perhaps that would leave little else to taste. The crust is a joke, the peaches are limp and wan, and the consistency is gloppy. Real Q-heads don't need dessert, anyway, but they do require superior brisket. If it's normally better than our sample, then consistency is an issue. If it's not, then let the protest rituals begin again - except this time I'll join in. •