Jame's scores on the strip

New café gets high marks in Holy Trinity of Tex-Mex 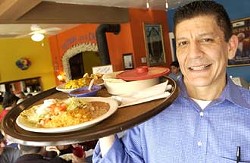 
There is a certain baseline set of components essential to the quality of a Mexican restaurant in San Antonio, and they are few indeed. Tortillas, beans, and salsa are the Holy Trinity - nutritionally and culturally; all the rest is gravy. More about gravy later.

James' Café, Cantina, Patio, etc. has taken over the space at East Woodlawn and North St. Mary's - most famously occupied by Café Camille - and the Manet-like mural that distinguished the rear dining room of this Topsy-like compound has been minimally Mexified to suit the new theme. In the front parlor, colors have been vivified as well, and a tortilla-making station has been installed; at peak times, two tortilleras are busily engaged in patting and rolling out corn and flour tortillas. Even before you find a seat in the jumble of tables, this is a positive sign.

The news gets even better once the tortillas hit the table. The corn models are uniformly shaped, both thicker and more tender than the packaged norm, and steamed to fragrancy; the flour version is encouragingly irregular, endearingly floppy, and disarmingly light. (Yes, we know they really pack more calories per square inch.) Score one for the Trinity.

James' beans are bueno, too. Full of good lardy flavor (even if lard isn't actually used), neither runny nor excessively stiff and dry, and of a comforting color. Beans should be a no-brainer, but frequently they're brain-dead instead. Two down, one to go.

It's trendy to toast and/or roast everything in a salsa these days; I do it to enhance the flavor of indifferent tomatoes and to mellow-out aggressive chiles. Tell-tale black flecks are the insignia of authenticity in this case, and they don't appear in James' salsa, although flakes of red pepper do. Yet, there is a hint of smokiness, and a kind of backbite that grabs you once the initial heat has subsided. In short, this is a good, workhorse salsa with some racehorse aspirations. In a run for the ristra it might not come in first, but neither would it finish back in the pack.

Outside of the trio sagrado, there are of course other touchstone items in the Tex-Mex pantheon. Rice is certainly one of them, and here James hits a decent norm: it's neither clumpy (which is the kiss of death) nor especially interesting in any way. Guacamole is another anchor: Floating around somewhere is a staggering statistic about the yearly avocado-per-capita consumption in San Antonio. Suffice it to say, the number is large, which makes the equally high incidence of indifferent-to-bad guac even harder to comprehend. James' genuine guacamole starts from the base of fresh avocados, mashed, but not blended, to which ... well, there's the rub - nothing seems to be added. Even at peak season, avocados need a little salt, a squeeze of lime, maybe a touch of cilantro. (Onion, chiles, and tomato are optional, but welcome.) Unless it is to be the chip-dip star of an evening, guacamole doesn't need to be too tarted up, but a little eye shadow equivalent never hurt.

Breakfast tacos are another Tex-Mex bellwether, and if we were to rate by size alone, James' would score near the top of the chart; those formidable, floppy flour tortillas require a lot of filling. The deluxe, $1.50 machaca (dried beef) con huevo adds flavor to the equation as well, but the real deal is the unpretentious, $.99 papas a la mexicana. Tender cubes of potato sautéed with a little tomato, onion, and chopped chile - it doesn't get any better than that, unless you add a jolt of the sultry salsa.

The only additions required to James' menudo are modest amounts of chopped onion and chile, and perhaps a squeeze of lemon (no oregano is offered); the famous morning-after soup, full of hominy and characteristically chewy honeycomb tripe in a rusty, ancho-accented broth, otherwise stands on its own.

The signature salsa verde stars in the enchiladas verdes, and my only complaint is that there is not enough of it. The chicken filling is basic but generous, and there are copious amounts of both melted Monterey jack and sour cream, but the tangy-tart sauce tends to get lost in the shuffle. The chicken-stuffed flautas on the botana plate start from the same base as the enchiladas, but the frying renders them crisp, almost crunchy. They are great alone, but feel free to smear on a little guacamole. The quesadillas that are the other half of the botana plate are of the cheese-slammed-between-two-tortillas type; normally they don't get my attention. Must be the flour tortillas that elevate these above the ordinary.

Gravy - at last, we come around to gravy. It can seem ordinary, too, especially when it's a floury afterthought. A rich and spunky tomato-based gravy is not only integral to the idea of the lengua plate, it is also an equal partner to the melt-in-your-mouth tongue. (A bizarre notion if taken to extremes.) Tongue is under-appreciated by much of the population, but this delicate dish would pass the blindfold test with flying colors.

You might have trouble finding a table for weekend breakfast at James'. But you will almost always have difficulty finding a parking place on East Woodlawn. Don't even bother. Although it is ostensibly a two-way street, parking on both sides renders it effectively one-way and leads to frequent confrontations. Take James' advice and park in the rear lot of the defunct Arriba across the street. It's hard to imagine what the traffic situation would be if the sorry St. Mary's strip ever sprang back to life. Shuttle service from another defunct property, Albertson's, might become necessary. •