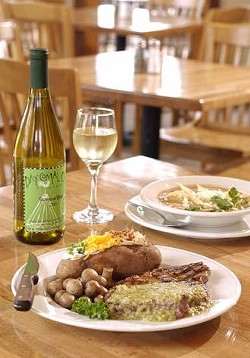 
Boy, howdy. The belles at the bar were in full rodeo regalia on a recent Saturday night at Scenic Loop Cafe. Rising to the occasion, Mike Barfield's band held court under the glassy-eyed gaze of a major trophy head and in front of a backdrop of cedar cabin cladding. Despite the group's lively sound, the bar was a place of refuge from the adjacent dining room where the noise level seemed higher - and lacked the acoustic appeal of Mike's "original Americana" music. Framed in hard surfaces, including a flagstone floor, the restaurant is its own amplifier, and the handsome kilim and other rugs hung about don't quite do the job of noise suppression during peak hours. So here's a tip: Even on weekends, Scenic Loop's crowd appears to be an early one and there was a noticeable thinning by 8:30. Arrive late.

And arrive hungry, the portions are enormous. We began innocently enough with appetizers of shrimp artichoke au gratin and shrimp en brochette. The de-skewered shrimp were a good appetizer size - and seemed a little lonely on the too-large plate. Crisp bacon clad the shrimp, which had been stuck with a sliver of jalapeño, and the package, completed by a dip of chipotle mayo, was appealing in all its contrasts. The gratin, with its mountain of toasted baguette, was enough to feed several of the nearest and dearest, which is perhaps appropriate, since the dish is effectively a cocktail party standard upscaled with shrimp. (Another version substitutes spinach for the shrimp and is even more of a cocktail classic.) But before you get the entirely wrong impression, it must be said that the several shrimp were of reasonable size (not those nasty "cocktail" shrimp), and although I would never order the dish again, the flavors were neither bland - there seemed to be a chile bite of some kind - nor strident. So much for faint praise.

The corn poblano soup I probably would order again, and in the bigger, bowl size at that. Essentially a variation on the tortilla theme, there were enough textures and tastes for several soups in this single cup; the poblano was not overwhelming, although you never know with the charismatic capsicum.

The kitchen, however, tends to treat poblanos as an Italian restaurant would use tomatoes; they're in everything from the poblano con crema that tops several dishes and the Scenic Loop rice (along with corn, onion, "and a touch of cheese"), to the topping for chicken enchiladas (which are also served with the aforementioned, poblano-accented rice); they can be ordered as a side of poblano asado stuffed with Monterey jack and topped with poblano con crema; and they star in the chile relleno de espinaca - also with poblano cream. Choosing to go with the flow, we bellied up to the chile relleno with its filling of spinach, pine nuts, and golden raisins. Oh, and its topping of poblano con crema.

It's not easy being green, and green is the one-note impression of the dish. The spinach had its own flavor and nothing else; the golden raisins were few; and the pine nuts didn't have a chance. In short, hard as it is to imagine a stuffed poblano being boring, this was boring. (But at least it didn't give any lip to a glass of Dry Comal Creek Sauvignon Blanc, which was pleasant but might have been devastated by anything very assertive.) The accompanying Scenic Loop rice worked: Here the accent of poblano is just enough. And the borracho beans, while lacking any hint of beer, were adequately bacony.

When the kitchen turns to jalapeños, the pendulum swings the other direction. Among beef, poultry, and pork selections that include a ribeye, a filet, a chicken breast five ways, and pork milanesa, the Steak Puebla stood out. "Spicy" the menu says, and spicy the steak is. Both marinated in garlic (lots), jalapeños (even more), and herbs of unknown origin, then topped with same, the normally docile 14-ounce ribeye turns Terminator. You can save yourself some pain scraping off the topping, which tastes like a particularly aggressive chimichurri, but it's hard not to imagine that the double whammy of marinating and topping is overkill; the steak was superb in its own right, and we could barely taste it. Where is mild poblano con crema when you really need it?

The steak came with mushrooms sautéed in butter and wine, fine in their own right but odd with the spicy steak. Then there was our side order of Mom's Baked Macaroni & Cheese. Sorry, Mom, for distracting you with homework questions while the mac 'n' cheese was in the oven, but you overbaked it regardless. The result was chewy and uninteresting - definitely not the creamy-cheesy antidote to the steak we had imagined.

But wait, dessert is right around the corner, and it, too, was served in huge portions. I was reluctant to have the kitchen nuke the upside-down apple pie too much, and as a result they took me too much at my word; it could have used a little more heating. This is clearly not a packaged pie full of the usual glop, however; and the layer of pecans is a welcome addition. The Butterfinger brownie has a equally honest, homemade feel, but I can't help but think that it would be even better if made according to the menu description: "freshly baked brownie topped with chocolate mousse capped with Butterfinger candy bar." The bar had blended into the mousse leaving the telltale taste but not the characteristic crunch.

Now is the time to admit that, despite all the nitpicking above, Scenic Loop Cafe seems like the right restaurant in the right place. It's visually appealing, the kitchen is not content with knee-jerk renditions of recipes, and come spring, the outdoor patio, sporting a covered bandstand, will be the perfect place to suck down a longneck while listening to one of the regular weekend acts. Maybe Claude Morgan and his "Texadelic Cowjazz." What, you've never heard of Texadelic Cowjazz? •