Fruit of the vine 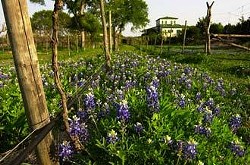 
The Vineyards is the only restaurant hereabouts where you can get a glass of wine made from grapes grown right outside the dining room windows. Located about 30 minutes outside of San Antonio, the Vineyards is a destination restaurant for most of us, and as such it satisfies most fantasies. The drive, after leaving I-35 at the Natural Bridge Caverns exit, is a pleasant one; the restaurant, situated above a three-acre vineyard, is rustic-looking and unpretentious, and the interior even sports a pot-bellied wood stove - not of more than atmospheric interest for much of the year, but welcome the weekend of winter's last, recent gasp. The youthful serving staff belies the rural setting in both its earnestness and its sophistication, and although some of the wine information being dispensed to adjacent tables wasn't altogether accurate, neither was it totally misleading. And the same menu pitch - with all its attendant culinary terminology - was given to both the prom couple (he in tux, patent leather, and spiked hair, she in floor-length, off-the-shoulder red with judicious sequins) and an older pair celebrating an anniversary. So far, so good.

The Vineyards' current owners have fashioned a menu that is varied, yet stops just short of the all-things-to-all-people approach favored by some restaurants that don't yet know what they want to be when they grow up. Two soups, a roasted tomato basil and a poblano corn chowder, top the list, and both have their virtues, as well as their flaws. An exuberance of cumin diminished the impact of the chowder - even the almost-al dente cubes of potato might have been otherwise forgiven, since the flavors were basically fine. The tomato soup, for its part, seemed too insistently herbal, and the oven-roasted tomatoes - not as mellow-tasting as expected - were slightly sabotaged by unnecessarily crisp carrots and yellow squash. All that said, both were still decent soups with, ouch, potential.

Pardon me for a moment while I go on a tirade not directed exclusively at the Vineyards; it has to do with the use of the term carpaccio. In the strictest terms, it refers to a dish created in 1961 at Harry's Bar in Venice where it consists to this day of thinly sliced fillet of beef dressed with a mixture of mayonnaise, mustard, brandy, and Tabasco. The name derives from the (beefy) reds used in the works of the Italian painter, Carpaccio. Already you get the picture that salmon wouldn't qualify on the basis of color alone. (The Chick-Fil-A cows would doubtless approve, however.) In this respect, the Vineyards is no more at fault than local restaurants who have suggested there could be orange or pineapple carpaccio, but let's get serious here: If one is going to play fast-and-loose with terminology, the transgression should be accomplished with flair. The Vineyards' Salmon "Carpaccia" starts with good, smoked salmon, but it is sliced rather coarsely, served on sourdough bread with cold brie and a sliver of unroasted poblano pepper, with added black pepper, olive oil, and what appears to be packaged parmesan to the plate. The inspiration seems more like lox and bagel with a "schmeer" of cream cheese than anything Italian, but in any case, there is way too much going on here - to too little effect.

Paradoxically, the more complex Oysters Angelina turn out to be a good deal more satisfying. Inspired in this case by the classic Oysters Rockefeller (but, note, not named after them), the appetizer consists of Gulf oysters on a bed of lightly garlic-laced spinach "smothered in a rich Cajun basil butter" and further capped with bread crumbs and parmesan. Perhaps because the Cajun basil butter is less a player than imagined, the whole thing works very well. Points off for (presumably) packaged parmesan, but congratulations on the dish as a whole.

The entrées arrived, promptly but not rushed, and with them the probatory glass of the Vineyards' own 1999 Signature Cuvée. The wine is comprised of 20 percent lenoir grapes from the very vines outside your window, blended with 80 percent cabernet sauvignon courtesy of Becker Vineyards, who also produce and bottle the wine. Lenoir is the most widely planted grape in Madeira, where it's called black Spanish; it's found in the U.S. principally at Val Verde Winery in Del Rio. Pricey at $10 a glass, the wine has a racy, city-meets-country edge that's acceptable in context, but is unlikely to win it a wide following. It is, however, pretty good with an equally rustic portobello lasagna.

Basically, I liked the lasagna; it had an appealingly handmade look, a good, hearty taste, and avoided the leathery texture than often suggests multiple reheatings. The description - or perhaps a personal fantasy - led me to expect the mushrooms to be more prominent in the layering, however. In other words, the logic behind using this large-capped fungus would seem to rest in making it an equal partner - perhaps sliced in half horizontally - with the layering of the pasta. Not chopped. Just a thought.

About pork loin, I will never learn; it's rarely as moist as one would like, but the Vineyards' rendition does score on taste by virtue of first smoking the loin, then finishing it on the grill with lots of pepper. Yet just where you would expect the country setting to inspire the accompanying garlic mashed potatoes to lusty coarseness, they turn out to be daintily puréed and with hardly a hint of the stinking rose. There's no hold-back with the Grilled Chicken Chipotle, however; its marinating in chipotle garlic oil comes through nicely in the finished product, the sliced breast isn't overcooked, and the side of linguini with a cilantro cream sauce is appealing in its own right. So, too, are the sautéed vegetables common to all plates; they even included that new, city-slicker hybrid, Aspiration-a broccoli-like vegetable I'm not sure the world needed, but it didn't ask.

Desserts at the Vineyards are made for the restaurant locally, and potentially could be quite good if only they weren't served so cold - a universal dilemma. Yes, I realize it's hard to anticipate what people are going to order so that a little tempering time could be programmed, but when our layered and lush-looking Triple Chocolate Decadence tended to flake, rather than to yield willingly to the fork, we knew the flavors weren't going to be developed. Same, to a lesser degree, goes for the otherwise well-flavored vanilla bean cheesecake - which, by the way, is not "topped with cranberry glaze" (implying a thin, clear layer), but rather served with cranberry sauce on the side. Accuracy in menu writing is yet again another rant, but I'll save that for another time - not just because I long since ran out of room, but because the overall experience at the Vineyards was extremely pleasant, and they shouldn't have to bear the burden. •