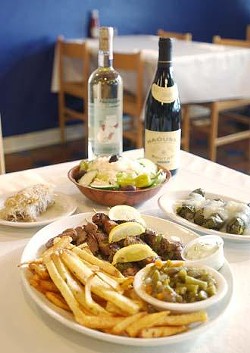 
Not far into the introduction of one of my Greek cookbooks, the following assertion appears: "The truth is that the Greeks taught everyone else how to cook and eat." After which the students outstripped the teacher, I couldn't help thinking - a conclusion the authors almost reluctantly come to a few paragraphs later when they admit that, " ... modern Greek food may lack a certain polish when compared to some of its sister cuisines in the Mediterranean basin."

But they follow up by noting, "It may well be that the very simple character of Greek home cooking is what makes it so appealing." If we can add restaurant cooking to the pot, John the Greek fits the model to a tau. The atmosphere is travel-poster plain; the service is smart but familiar and the food, well, the best of it is homey and utterly unpretentious, except for the all-Greek wine list.

In addition to hummus and flaming salty cheese, appetizers at John's include the usual dolmades (grape leaves wrapped around a rice filling), and they are among the few items not made in-house. The octopod part of the octopus salad is another, and although it's OK by the time John's mother, Effie, the soul of the kitchen, gets through with it, this is not a must. (Neither are the dolmades, for that matter.) A simple slab of feta cheese, however, is appealingly brisk and tart, and the accompanying pita, imported from Chicago, is perfectly tender and equally fresh. There is a semantic problem with the so-called fava purée with olive oil and onion, but once you understand that split peas, not fava beans, are the real deal here - and that salt is desperately needed - your expectations change. Relax, think home cooking, and tear up some pita to use as a scoop.

If the cold dolmades are ordinary, the beef- and rice-stuffed, hot models, hand-made by Effie, are another matter altogether: They begin to reinforce that home-cooked ideal, with the possible, niggling exception of a lackluster avgolemono (egg/lemon) sauce. Homier yet is the Greek rendition of mac 'n' cheese, the pastitsio; you can order it solo or as a part of the Combo Plate No. 1. Elbow macaroni is the foundation of this casserole classic; it's fortified with a cinnamon-laced ground beef sauce and topped with bechamel and a little parmesan. Nothing fancy implied, nothing fancy needed. The same approach prevails with the moussaka: Take away the pasta, put back potatoes, layer in a little eggplant, meat sauce, and more bechamel - not spectacular in any way, but honest and comforting.

More Mediterranean polish appears on the leg of lamb souvlaki; by whatever name, this is a dish that could come from almost anywhere in the eastern basin, and Effie does it proud. The skewered lamb is tender and moist, definitely not overcooked, and bolstered with sidekicks of onion and bell pepper. The taste is terrific, especially when augmented with tzatziki. I don't remember if it came with the souvlaki or if we kidnapped it from the combo plate, but this traditional, yogurt-based cucumber sauce seems especially good in Effie's hands, and its cool-tart flavor plays beautifully against the almost-pink lamb. The french fries that accompany the souvlaki and several other dishes can safely be ignored, but the obligatory Greek salad does command attention. OK, it's iceberg. And, yes, there may be a substantial puddle of olive oil in the bottom of the dish when you finish. Effie is not shy with dried oregano, either. But there's a synergy that seems right in the classic combination of crisp lettuce, cheese, tomato, and olives.

There's also an inevitability about the combination of lamb and eggplant, and the two come together with unexpected results in the weekends-only lamb shank: Eggplant trumps the lamb. Maybe it was the memory of sublime souvlaki, but this cut was fatty and less flavorful in comparison - although it was precisely the fat (plus onion and tomato) that gave the eggplant its edge. Which brings us, as advertised, to the Greek wine - presumably a lamb-mate match made on Mount Olympus.

We tried three of the list's Greek reds, one as a sample courtesy of our spunky waitress. In order of descending price per glass (the first of them somewhat Olympian in its own right), they were the Agiorgitiko ($9), the Grand Noussa ($6), and the Noussa ($4). Perhaps it was the picnic-table setting of John's patio (or maybe the Greek chorus of grackles commenting on our tasting from their nearby, parking lot perch), but the two higher-priced glasses offered little to justify the tab; there was a tartness that lingered, and a finish that didn't, although both improved with some active swirling. The cheapest wine (the waitress' favorite, by the way) actually yielded the best value. Having said this, it appears that Greek wines have come a long way since I first tasted them (and since the Greeks first taught the world to make wine, for that matter). John is to be encouraged to continue to make them available in this market. We'll try the whites next time.

No encouragement is required to try Effie's homemade desserts. Her walnut-filled kataifi (sometimes made with pistachio or almond) is the best I've ever had. Yes, this is the one that looks like shredded wheat, but Effie's is especially fat with filling, and the honeyed syrup laced with cinnamon that suffuses the servings stops just short of cloying. In contrast, although the taste was fine, her phyllo-enfolded custard pie suffered from soggy-chewy crust. It must have been great drizzled with syrup straight out of the oven, however, which is where home cooking - from ancient Greek to contemporary Californian (or the cuisine of your choice) wins every time. If John's father, Pete, can be convinced to close the original Harry Wurzbach location to join the family here, John the Greek will be serving home cooking with all the family at home. And it doesn't get much better than that. •