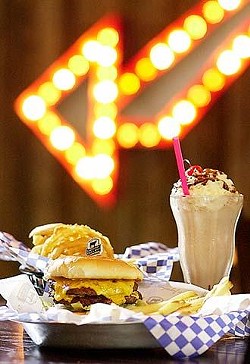 
What America needs right now is another burger joint. No, really.

At least Moe Lazri thinks so. Lucky Burger's Lazri is no wild-eyed, wet-behind-the-ears idealist with rags-to-riches dreams - or if he is, he keeps this part of his personality well-hidden. No, he is the sophisticated and, one assumes, business-savvy manager of the Fig Tree and Little Rhein restaurants, two establishments with an enviable track record and (especially the Fig Tree) a burgeoning critical reputation for fine food. For his first venture as an owner, one might expect an operation with a certain swell - maybe not the cut crystal and delicate china of the Fig Tree, but certainly something with fine-food foundations.

Nothing could be further from the truth, at least superficially. For starters, the place itself is a gas station channeled through a flowers-to-go outlet on Northwest Military Drive: hardly the tourist-trammeled River Walk haunt Lazri is used to. Curtains and starched tablecloths don't surprise you upon entering; rather, there is a grab bag of materials from stamped metal and rough wood to painted plaster and corrugated tin. Decorative elements include old Coke signs over-painted with geometric designs and a couple of active TV sets. On a Saturday afternoon, one was tuned to cartoons, the other - the mute one, alas - to a golf match. An illuminated arrow salvaged from an old sign shows the way to the order counter. Step right up.

What you will find is a very simple menu. Lazri has not attempted to reinvent the basic burger. Rather, he has tweaked it just a little with Lucky Sauce and, with shades of the Little Rhein and its reputation for beef, based it on 100 percent Certified Angus ground chuck. This sounds good, but does it matter? The basic Lucky Burger, served on a lofty but not otherwise tricked-out bun, with chopped lettuce, sliced tomatoes, sliced pickles, onion, and the sauce, which is almost best characterized by what it's not: not greasy, not stingy, not bland, not pre-fab looking. The Lucky Sauce, a "zesty mayo," according to one server, isn't a major factor, and if you deconstruct the product, each component is real and fresh. Yes, the beef does have an honest taste if you think about it. Put back together, this is a good, but not earth-shaking burger. I was more fascinated, I have to admit, by the exceptionally good onion rings the first time out. They blew me away.

Almost-as-good french fries accompanied my Lucky with chili and cheese the second time around. Let me assert right here that I would never order a burger with chili and cheese if I weren't writing about it, and Lucky's rendition did nothing to change my mind: It is a mess. But at least the chili isn't overpowering, and the cheese is low-key, so, if you are looking for it, the taste of the basic beef does come through yet again. I swear to you I also would never order an Oreo cookie shake, but in spite of the superfluous aerosol cream and the silly cherry, this was way too good and an altogether fitting companion to the over-the-top chili burger. If you're going to commit caloric hara-kiri, do it in a big way.

The friend who turned me on to Lucky asserted that the Double Lucky with cheese was his favorite, and here, too, I first resisted on the grounds of excessive, over-consumption. The Hummer of burgerdom, I harrumphed. But now that I have seen the light, let me explain it all away by simple physics; it's a question of critical mass. The bun and all the trimmings remain the same, you see, and the cheese becomes a kind of unctuous enhancer melted between the two patties - melted to the point that its function is purely that of bolstering the beef; it has almost no character of its own. Hence, if the assertion is that Angus really matters, here is the place to test it. Bingo or Q.E.D, to use a tonier term. This is the apotheosis after all.

After two-thirds of a pound of beefy beef, you probably won't want a banana split, but if you should, you will find it pretty classic. Can't say I've ever been as impressed with Blue Bell as I'm supposed to be, but branded ice cream does fit into the business plan. My only suggestion - and this is purely personal - would be to offer an alternative to the pineapple topping that automatically comes on the vanilla component of the three-scoop serving (strawberry and chocolate are hard to mess with). Caramel, perhaps, or even goofy marshmallow. The pineapple is especially out of place in the melted muddle left in the bottom of the boat - but again, this is from someone processed-pineapple averse.

After the bada-bing of the double burger, it was inevitable that the grilled marinated chicken breast on a whole wheat bun would be a let-down - not a disappointment, really, but at a severe comparative disadvantage. This said, it's a perfectly fine sandwich, with all the burger trimmings except for pickle, and plain mayo standing in for the Lucky Sauce. (A chipotle mayo - and if there had ever been enough of it to taste, this is what I imagine the Lucky to be based on - anoints the fried chicken version.) Grilled chicken also stars in the quasi-classic Cobb salad with romaine, avocado, bacon, and hard-boiled egg. This is a far, far cry indeed from the double burger, but it's a clear, fine-and-fresh alternative to bubba-sized beef. A Caesar, with or without chicken, is also available.

Add a grilled cheese sandwich, with or without tomato, and that's about it for the menu; this is not the Brave New World of the burger business, and as a cynic, it strikes me that Lucky Burger isn't nearly gimmicky enough to break into the national chain spotlight. Good for them, for the idealist in me also likes to think that quality will be rewarded. Maybe even in this life. And the critic also notes the following: Lucky offers wines by-the-glass that are a cut above what you might expect - if you expected wines at all. Ravenswood, St. Francis, and Rosemount are among them. Then there is this: In the evening, one of those TVs - the one coughing up cartoons during the day - was tuned to the Food Channel. The apple doesn't fall that far from the tree after all. •