Cafeteria-inspired fare from Rita's on the River 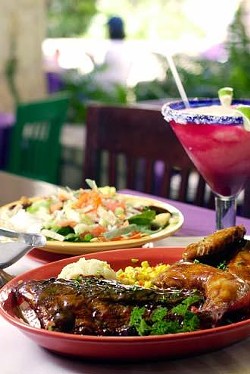 
It was a bright and sunny day (the dark and stormy part comes later), and a friend and I were ambling along the River Walk in search of a place to have lunch. This, we were thinking, is why we live in San Antonio. All seemed right with the world - especially with the orchid tree at La Mansión del Rio, already beginning to bloom. The obvious place to take all this in was a table immediately across the river at what once was Presidio.

Ambitious but never fully successful, Presidio's New World Mediterranean food didn't excite the multitudes; neither did its later foray into Nuevo Latino. It wasn't altogether unexpected when rumors of Presidio's demise surfaced several months ago. Not so surprising, either, that neighboring Links, which had just retreated to River Walk level from its former two-story operation, should make an arabesque to take over the Presidio space across the courtyard. And before long, the newly occupied premises was rebaptized Rita's on the River. The space was also stripped of all of its previous high-art trappings. In the place of first-rate works by local artists, there are now stuffed cloth caricatures of toucans, (the color scheme has been reinvented in coral and turquoise), and a big photomural of a Goldbeck panoramic view of Alamo Plaza, taken in 1918. Actually, the Goldbeck is fine, and, apart from the toucans, there's nothing really offensive about the new interior. Still, it's hard not to lament the dumbing down of a once edgy environment. The cuisine has suffered the same lowering of the common denominator. Prices, on the other hand, have been relieved of all restraints, resulting in a menu that runs from a $4.95 burger to a $23.75 South Padre platter with skewers of sirloin and shrimp. And along the way, we encounter Mexican food of sorts. On that first sunny day, we took advantage of two of the four lunch specials, all sandwiches ranging in price from $4.65 to $8.35. The BBQ chicken sandwich, served on an Italianesque bun, is only barbeque if you accept that grilling plus after-market sauce equals Q. Although not indicated, melted cheese and bacon are also part of the equation, along with a mess of greasy, fried onions. I wouldn't order this again, but amazingly, the total package wasn't all bad. There was at least flavor - though the chicken itself counted for the least of it. Much the same can be said for the ribeye sandwich, sporting a thin (yet not, to the kitchen's credit, overcooked) steak and more of the same unctuous onions, plus mushrooms. For the price ($8.35), this seemed a little paltry, a pickle spear not adding much value to the package. Rita's house salad, on the other hand, was fresh and adequately inventive, with a mango-jalapeño dressing in the plus column and startling turquoise and coral tortilla strips on the minus side. The same strips appeared in a cup of tortilla soup on another visit, leading me to suspect that they were coordinated to the new color scheme. Or vice versa. Color considerations apart, the soup might not have won prizes, but it was honest, and the grilled chicken pieces that appeared in adequate amounts did add appeal to an already flavorful broth. Emboldened by the relative success of the soup, I proceeded to a plate of seafood tacos, "sautéed in our own pico de gallo and mango chutney and topped with avocado," with some expectations of satisfaction - despite a price tag of $14.95. There's no disappointment like one buoyed by hope. These were tacos of some distinction, all right: They were likely the worst I've ever had. We can start with the leathery flour tortillas or the dry bits of shrimp and crawfish tails, whichever you prefer. A few chunks of underripe mango, maybe sautéed in something (but decidedly not a chutney), were mixed into the seafood - which might also have contained small bits of scallop - it was hard to tell. A single slice of avocado topped each taco, and as best I could discern, pico had never profaned the mix, though there was a facsimile on top of the accompanying rice and refrieds - the rice was OK, the refrieds were canned-tasting. I might have done better at the $6.99 lunch buffet - despite it looking like a school cafeteria line on enchilada day. I returned on that aforementioned dark and stormy night. A shot of sippin' tequila from the impressive list might have served to raise spirits; a full-blown margarita from the selection of eight, not counting add-your-own-schnapps variations, probably would have clouded critical faculties. Instead, I went straight for the half-rack-of-ribs platter, priced at $13.75. Add sirloin and the price skyrockets to $23.75. To its credit, this is a visually impressive plate, accompanied by a steamed napkin and lemon, a nice service touch. (Also, to be fair to a staff that might soon be looking for work, service was quite professional and friendly on each visit.) The ribs were lean, meaty, and relatively moist, if only modestly smoky. A sweet but tolerable sauce capped the ribs, with more in a pitcher on the side. I searched in vain for garlic in the garlic mashed potatoes, and was reminded of cafeteria line cuisine once again with the fiesta corn, a dry and chewy blend of kernels with a confetti of red and green bell peppers. I suggest adding Lithium to the schizophrenic menu, which doesn't know what it wants to be when it grows up. Although Rita's is not the first hand to fit this glove, it's hard to believe that prime River Walk real estate will long tolerate such confusion - or such mediocre food at premium prices. The tourists deserve better, locals deserve better, the building deserves better. •