Damn the tortillas and full speed ahead

Cascabel dares to skip the chips and spotlight the huitlacoche 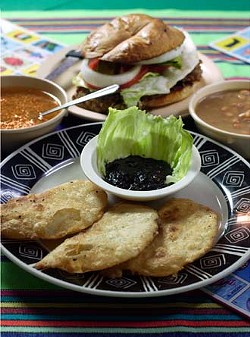 
It's sloppy-sensational, messy-magnificent, and it's as traditional a torta as you'll find anywhere in San Antonio. More traditional, in fact, which is the point of Cascabel, a trailer-sized place run by a brother and sister from Morelia. The torta ahogada is the result of an attitude that seems almost suicidal hereabouts: The pair refuses to serve chips and salsa. For that matter, there are no flour tortillas. No refrieds, either. Get over it.

Gaby and Geraldo may be fighting an uphill battle trying to showcase a cuisine that, in contrast to local places masquerading as Mainline-Mex, for the most part is authentic. Their first challenge is the restaurant itself. Located immediately across from Bonham Elementary School on South St. Mary's, it's easy to miss. Once you make it inside, through a yard that can charitably be called an afterthought, the picture brightens considerably. The tiny dining room has been decorated with an encircling serpiente and numerous pre-Colombian symbols, plus snippets of poetry and autographed testimonials, mostly in Spanish.

It's in this handmade and heartfelt ambiente that the torta ahogada is served. Drowning in a sauce of chile de arbol, the sandwich is stuffed with shredded pork and served with lettuce, onion, and sliced avocado. If the crema mexicana happens to be missing, speak up; it adds a cool-tart touch. You're expected to assemble all of this into something coherent and comestible, and it won't be easy. Give up and get messy.

There are other tortas, including a milanesa and another called cubana - not because it's pressed like the Cuban original but because they "put a little of everything in it." And there are several tacos, the most impressive of which is a pork taco a la Cascabel served with more punchy chile de arbol sauce. The cochinita pibil taco with achiote could have used a little onion and cilantro, but once we added a jolt of the crunchy salsa verde cruda, it snapped to attention. The taco "suadero," on the other hand, had nothing to recommend it; I can't even tell you what it was.

Cascabel's real appeal for the culinary thrillseeker comes from two dishes that are the menu's headliners: birria and mixiotes.

There is nothing particularly startling about the quesadillas de huitlacoche, but this may well be the point: A little shredded white cheese, the perfume of the fresh masa, and the earthy funk of the corn fungus combine to create something almost contemplative. Minus the cheese, it's a direct conduit to the courts of Moctezuma. And so are the quesadillas de flor de calabaza (squash blossoms), assembled and fried just as they might have been in the markets of Tenochtitlan.

Most San Antonians, especially those amantes of nearby El Mirador, are familiar with caldo tlalpeño, but Cascabel adds a smoky-fruity chipotle component. Gaby and Geraldo's frijoles de la olla are distinguished more by their restraint. And their sopa de fideo, the simple soup with fried vermicelli that's old-hat to generations of locals, strikes this gringo as being the kind of comfort food you had to grow up on to truly appreciate.

As earnest and intriguing as all the above is, however, Cascabel's real appeal for the culinary thrillseeker comes from two dishes that are the menu's headliners: birria and mixiotes. The first we're unlikely to see regularly unless there's a ground-swell of interest "We've been open five months and I've only had two orders for birria," declares Gaby, "so I'm taking it off." It's hard to blame her. A version of the Central Mexican goat or lamb wrapped in pencas de maguey and pit-cooked, birria is made by marinating the meat for several hours in a chile-garlic-cumin paste moistened with vinegar.

Mixiotes aren't exactly fast food, either, but with a promise to order several portions, I did manage to convince Gaby to make this Mid-Mex specialty one weekend. The name derives from a membrane peeled from maguey leaves that's traditionally used to make packets for steaming lamb, and in that respect it's similar to the birria. I've made this dish with the mixiotes at a cooking school in Acapulco, but as do many modern practitioners, Gaby uses plastic bags. She'll also make it with either lamb or chicken, and the procedure is the same: Rub the meat with a saucy paste of ancho and guajillo chiles, add some nopalito, wrap in large, dried avocado leaves, tie into the bag, steam and serve - still in its humble plastic pouch.

Though the chicken is a more predictable filling, it adds little to the brothy sauce that results. The fatty (and bony) lamb, on the other hand, melds magically with a sauce that's influenced mightily by the pungent avocado leaf. It's an entire culture evoked in an ironic, plastic packet, but it's nevertheless fair to complain that some of the servings were almost entirely bone, so a better cut of lamb would be much appreciated.

If you elect to venture to Cascabel, remember this: Geraldo is studying for a culinary degree at St. Philip's and is not always there, so it's only Gaby most of the time. Mixiotes must be ordered ahead. As for the birria, well, good luck to all of us. Good luck to Gaby and Geraldo, too, as this inscription on the wall expresses: "Mucha suerte promoviendo la verdadera cultura culinaria de Mexico." They're going to need it. •