Augie's barbecue is just the beginning 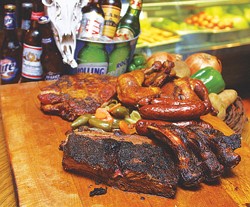 
There are precious few barbecue joints, I’d venture, where one can pick up a copy of The Poet magazine to go along with the pork ribs, fewer still that offer fresh oysters on the half shell. And I know of no other with a wine … but wait, I‘m getting ahead of myself.

The oysters aren’t always available, and I imagine the magazine, with works in both English and Spanish, comes and goes. But the barbecue is “made fresh daily,” so the only issue is the statement’s corollary: “Please forgive us if we occasionally sell out.” The pork ribs, mentioned in the recent Current survey `“Backyard barbecue,” October 17-23` do occasionally sell out, but I found them at noon on my second try. The baby bones are at once delicate and assertive, both tender and moist, and combine a smoky-peppery crust with an almost melting interior — a lot of freight for a runty rack to bear. But I’ve witnessed more than one party’s disappointment at their depletion, so you’re warned.

Augie’s is tricked out in the manner of most white-guy barbecue joints: license plates, beer signs, a few farming implements … and, of course, what is in this case the requisite display of the wire that tamed the West. The back patio is set with picnic tables on a carpet of cedar bark and bottle caps, there’s a movie screen, and a funky stage fronts a 16-foot barbecue pit that’s fired with red, white, and black oak, according to Augie. In all, it’s the essence of laid-back, layered with a touch of calculated nostalgia.

But nostalgia is a necessary component of barbecue, however you spell it. I can see no other reason for eating it with bread that disintegrates the moment it meets sauce, for example. Or for tolerating typical sides such as plain corn and overcooked green beans. Augie’s goes the extra mile with some of its sides, however: the creamed corn was too sweet for this taster, but it was homemade and gets at least a “B” for effort; the potato salad and slaw were honest, if not inspiring; the mac-n-cheese was OK only when hot. But the green beans with tomato, onion, bacon, and garlic were flat-out fine. Which brings us back to the reason we’re there in the first place: “Q.”

Although I can appreciate denser, smokier brisket, I admit to liking Augie’s moist, modestly smoky rendition. Your server will likely ask you if you want the fat trimmed, and I appreciate that, too. I could go for a more robust rub to give the crust something to say, and admit, too, that this is beef that benefits from just a little lashing with the house’s sweet-sour and peppery sauce. But I’d go back for it in combo with the pork ribs in a heartbeat. The tasting team all found the pulled pork sandwich to be tasty but too salty, but the sausage scored in its straight and peppery version and rated near raves for the jalapeño-studded rendition.

Now it’s true that Augie’s does offer burgers and dogs, something no purist place would deign to do. But they don’t do fancy, urban-cowboy stuff such as turkey breast and pork tenderloin. And at dessert, it’s pecan pie if you want something with a Texas touch. Also true that you probably wouldn’t head for a barbecue joint just for pecan pie, and true again that this crust was too cookie-like and the pecan count skimpy. But overall the pie performed well in context — and didn’t have the cloying, tooth-pulling sweetness that dooms many pies, even of county-fair caliber. Further, it won’t pollute your palate for the trek up the hill to the Tree House wine bar behind the barbecue pit.

That’s right, there’s a wine bar behind the pit, though you wouldn’t know it unless somebody told you. Consider yourself warned that the path is a tad treacherous and that you might well be the only patrons. There’s no sign; just cross the wooden deck and boldly open the door; the place looks like the residence it once was, but there are wine racks on the walls. And, at least Thursday through Saturday (the only nights it’s open except for special parties), there’s Xavier to help you out. Don’t bother looking at a wine list — if there is one. Just tell him what you like and wait for the result. Almost guaranteed you will never have had the wine. And almost guaranteed you will like it — at least he has never steered me wrong. On the last visit, sitting on a secluded balcony overlooking the pit, with Country and Western music wafting up the hill, we had a bottle of the 2004 Norman Vineyards Paso Robles Petite Syrah. It was big and boldly scented with blackberry and cassis and redolent with warm spice. At a very good price, by the way. It would have been great with brisket, too, but somehow I like the idea of keeping the experiences separate. Makes for a more multi-faceted evening if you know what I mean. •