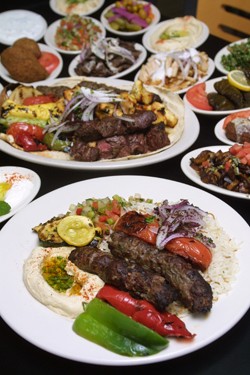 
Jerusalem Grill, a Persian/Turkish/Eastern Mediterranean restaurant and hookah joint, is the spawn of Galaxy 22, which, in turn, was an incarnation of Galaxy 21, formerly on Evers Road. Now located in the Ingram Park area, it finds itself tucked into the elbow of a strip center and flanked by the recruiting offices of every imaginable branch of the U.S. military. You can look at this situation two ways: Either the military finally has the Middle East under control — or vice versa.

My first foray into this shifting geopolitical environment was during the Galaxy 22 phase, and the place clearly had its appetizer act together. The chef’s multi-layered mazza menu tasting didn’t then — and most likely won’t now — conform to anything written, but it will surprise and delight regardless. My well-trained and highly disciplined tasting team (military beware) made short work of the vegetarian assortment that was most of what was available that evening. Intelligence from our voluble waiter indicated that a new partner was about to come into the picture to make “a lot of changes,” and that “the food would be the same but there would be more of it.” Sandwiches, for example. Fine; we would return.

But that night, with tables of men outdoors huddled around hookahs, and images of multi-veiled dancers flickering across a portable screen, we tucked into a selection of appetizers (the Full Mazza) that included a creamy and compelling hommus of chickpea and tahini; an assortment of appealing eggplant dips (the toastier one won); the unfortunately named but always rewarding dish of fava beans with garlic, lemon juice, and tomato called foul; and mahamara, a spicy, full-bodied dip of roasted red pepper that was the group favorite.

Other dishes, such as the strained yogurt dip called labneh, were especially good as accessories to companion plates. A blend of labneh with mahamara on pita, for example, was outstanding; the tart plate of cucumber with dill and yogurt seemed to work well with eggplant. And it also partnered well with the few meat dishes we tried — a well-flavored but dry lamb kabob, a moist and appealingly spicy kafta kebab of spiced ground beef formed over a skewer for grilling, and a chicken shawarma sandwich.

The meat for shawarma, which can be made from beef as well, is cooked on a hollow cone with a fiery core and sliced off for assembling into the sandwich that is often called the Middle Eastern taco or burrito — by us, of course, not by Middle Easterners. The meat itself can be spiced with the likes of cardamom and allspice, but it is the sauce of tahini, garlic, lemon juice, and yogurt that defines the classic. Slipped into pita with cucumbers, tomatoes, parsley, onion, and even pickle, it is the quintessential meal on the go. And far more healthy than any burrito I’ve encountered of late. Too little sauce, too much tomato was our assessment of the Galaxy 22 rendition. But this was only the first visit …

And then G22 went dark — or at least the phone ceased to work. We suspected a military crackdown right off the bat. Several weeks passed. And then one of the original tasting team made a physical reconnaissance and announced that the place was open and unscarred. On returning, I found the name had changed to the more defiant-sounding Jerusalem Grill, the new partner had made good on his pledge to expand the menu to include sandwiches — and that the expansion had also extended to “quick appetizers” on the order of chicken wings and nuggets, fried mushrooms, and stuffed jalapeños. My fantasies about armed intervention instantly were blown away by the realization that cultural imperialism is the biggest threat. But not to worry altogether; the rest of the menu remains intact, and the buffet line, nearly depleted during that first encounter, looked fresh and full. “We change the dishes every two hours,” stated the sole server, and though I tend to harbor a degree of skepticism on that score, the proof is in the practice.

The disadvantage of a steam table, especially one in which the choices aren’t labeled, is that it’s pure potluck — and the dishes do need to be chosen to withstand sitting out, no matter how short the time. But I wasn’t disappointed with my hearty lamb stew bolstered with rounds of potato and big chunks of carrot and, oddly enough, studded with straw mushrooms that seem more a part of Asian culture. (I swear I also detected slivered bamboo shoots but later determined I must have been hallucinating.) Another stew-like dish of green beans with garlic and tomato used small chunks of meat more as a seasoning and pleased as well in a comfort-food kinda way.

I also reprised the kafta kabob and found its fragrant spicing (cinnamon seems certain) as compelling as before. A refreshing tabbouleh, lacking the advertised mint but classically dominated by parsley, served as a satisfying sidekick to the kabob and its platonically perfect rice topped with red onion and sprinkled with tart sumac powder.

The city of Jerusalem may have more than its share of tensions these days, but Jerusalem Grill appears to have arrived at a comfortable détente. There were no doe-eyed dancers on a screen in the middle of a South Texas fall afternoon, but groups of men did still sit at tables engaged in nothing more active than quiet conversation. The recruiting offices were closed for the weekend. And life went on. •

THE SKINNY
The heir of Galaxy 21 and 22, Jerusalem Grill adds a buffet and some Americanized apps to its hearty Middle-Eastern fare.

DON’T MISS
Go for the appetizers, then consider kafta kabob.