Fishing for the highlights 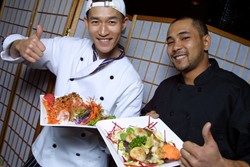 
Gotta say I like the name — shorn of its “Sushi Bistro and more” appendage. Wasabi alone would be punchy, evocative, and expressive of the restaurant’s theme. I’d also delete from most of the plates the colorful but entirely superfluous assorted, shredded vegetable matter — but let’s work up to that more slowly.

You’re greeted with a hearty Japanese howdy upon entering Wasabi, the former Thai Orchid that itself replaced a string of previous tenants in the wood- and brick-framed space at the Colonnade. Little save a few banners, lanterns, and screens distinguishes this décor from the last, though the front-and-center sushi bar does imply that this will be the menu’s focus. But since it’s a little awkward to take notes while sitting under the gaze of the sushi chef and his stalwart assistants, we picked a table within view and proceeded to all but ignore the classic nigiri sushi the first time around.

Listed under Appetizers and Starters is a dish called Peppered Tuna Tataki that is rubbed with house seasoning (mostly cracked pepper) and served with pickled-ginger sauce, spicy sauce, and minced garlic. The pickled-ginger sauce was a mystery. There was some heat, mostly from the abundance of pepper, and the garlic was oddly red and crunchy — or was that garlic-laced crunchy ginger? In any case, it was all too much for the tuna, sliced so thin that a single piece had little flavor of its own.

In the same category, seared scallops with olive oil and garlic seemed far from Japanese in character but were appealing nonetheless. The organic spring mix that accompanied them was altogether unnecessary, but even stranger was the caviar-mayo dressing which apparently consisted of fish roe blended into mayo with the addition of an aggressive orange colorant. The dressing did nothing for the scallops, was marginally interesting on its own, and clearly wasn’t meant for the greens. So far either we were having trouble keying in on the chef’s intent — or he was having trouble formulating it.

Selecting one of the Sushi Chef’s Personal Favorites did nothing to clarify the situation. The Jala Machi Japanese (yellowtail) indeed came as it had been advertised: thinly sliced, with jalapeños (also thinly sliced), tobiko caviar, and citrusy ponzu sauce. Plus another heap of greens. This time the greens seemed purposeful: They suggested an attempt to keep the diner from feeling he was being had by paying $16.95 for a few slices of (admittedly fresh) mild, raw fish accompanied by half of a small chile and some red (and nicely crunchy) roe.

It didn’t work, not even factoring in a preliminary bowl each of Japanese salad with fluorescent orange dressing and earthy but uneventful miso soup.

So maybe the maki rolls would turn the tide, we thought, and for a time, the unagi maki almost did the trick. Though the sweet ginger sauce accompanying this inside-out roll was mostly just sweet, the smoky eel was great, and the crunchy cucumber played perfect counterpoint with it and the creamy avocado. Score one. Then deduct a few points for the WASABI Roll. Lashings of spicy, very orange mayo scarred this plate, consisting of rice rolled around “assorted fresh fish” belted with seaweed, coated in a garlic cream-cheese batter (with all the cream cheese on the menu, I had to relent once), and deep-fried. The resulting crust is crunchy, to be sure, but the rice gets pasty and the fish is reduced to a bit part. A scattering of smelt roe does little to help justify the $13.95 tab.

But a bottle of Sho Chiko Bai Nigori unfiltered sake was pleasant with the spicy elements of the meal — especially after following the instructions to shake the bottle vigorously to blend in the creamy lees. (At a restaurant touting sake, however, I would expect to find more than six bottles on the menu.) And a finale of red-bean ice cream, just sweet enough, sent us out in a better mood than might have been expected.

A word of warning about lunch. Though it doesn’t say so (and my waiter didn’t realize), the lunch menu is only available on weekdays, scuttling my plan to return for a reasonably priced bento box of chef’s choice sushi on Saturday. (It’s $12.95 at lunch and $18.95 at dinner.) So I put together my own assortment, starting with a seafood-capped sunomono with cucumber, octopus, squid, and shrimp. That krab was substituted for the squid might have been a good thing as the octopus wasn’t as nicely neutral as usual, and the delicate, cooked shrimp (one, sliced down the middle) got lost in the shuffle of sweet vinaigrette and more shredded vegetables. The real kicker came with the nigiri sushi, though here I’m willing to share the blame: I ordered the market-price fatty tuna (otoro) without asking the price.

Don’t do the same; it does not go down with the stock market. For $8.50 I got one piece of pale and soft, though fresh and mild, tuna atop the usual lozenge of rice. You guessed it — decidedly not worth it. Better was the loosely wrapped masago (smelt roe) and the perfectly respectable, though slightly fishy on the finish, hamachi. A pint of draft Sapporo helped things along. Two pints would have helped even more — maybe in tandem with a dish such as the Korean bi-bhim-bob served in a hot, stone bowl. Oh, and one more thing: An unnecessary TV set within view was tuned to the Food Network — in theory a good thing given the alternate possibilities — except Rachael Ray was on during my entire lunch.