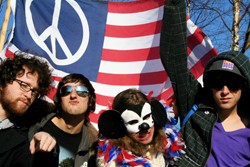 
Meet Peachcake, the vigilante duo who uses their mutant-based powers to protect the world from audio-terrorism. Their quest to do something positive and eliminate crime has taken them to many states, and they were featured on Jones Soda Co. bottles nationwide in 2005 for their efforts. Studio musicians Stefan Pruett and Johnny O’Keefe team up with their live band members for an energizing set on a stage packed with flashy lights and electronic eye-candy. But the band won’t be the only ones decked out in funky flair and glowing necklaces — the dance revolutionaries encourage their audience to dress up as well. Peachcake will be performing feel-good music from their new album What Year Will You Have The World?, set to release in late spring. $10/12, 7pm, Rock Bottom, 1033 Avenue B,
(210) 224-4005.