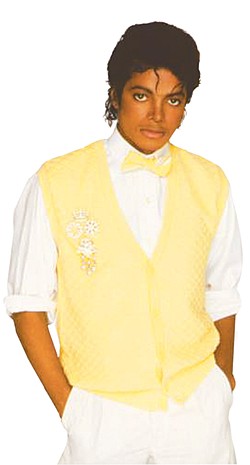 
In 1982, Michael Jackson and producer Quincy Jones focused the youthful energy of Off the Wall into a more diverse and mature package, tackling pop, funk, and rock in a way that played up Jackson’s musical strengths: his knack for rhythm and his spontaneous, effortless vocals. Jackson also grew as a songwriter in the three years between Off the Wall and Thriller, penning the exuberant “Wanna Be Startin’ Something,” “Beat It,” and “Billie Jean” (which remains the best song of his career). Toss in “Thriller” and “Human Nature” — Toto’s only positive contribution to the world — and you can see why Jackson crowned himself The King of Pop: Thriller bows to no one.

Of course, Jackson was never able to repeat that success, perhaps because he’s tried so hard to recreate the Thriller formula ever since. His cheesy duet with Paul McCartney begat a similar duet with Stevie Wonder on Bad. Eddie Van Halen’s solo on “Beat It” sired Slash’s solo on “Black or White.” While his popularity could not be disputed, Jackson — who now had an empire to maintain — stagnated trying to keep his crown. The king is dead; long live the king.

At least that’s the idea behind Thriller 25 — a reissued, remixed version of the record that influenced an entire generation of pop musicians. Artists such as Justin Timberlake and Usher have become stars by copying MJ’s playbook, and it would be fitting for them to pay tribute to Jackson’s career milestone — but they were either too busy (or too smart) to try and rework Thriller. Instead, we’re stuck with Fergie and will.i.am of the Hack — er, Black Eyed Peas.

Overseen by the dubiously talented will.i.am, these “bonus” remixes are weak, uninspired (astounding when you consider the source material), and only serve to underscore how shitty much of today’s pop music has become.

Even Kanye West fumbles: “Billie Jean 2008” is at best too reverent, or at worst just plain lazy. His remix entails simply slowing down the track and adding some embarrassing interjections (“Unh! Yeah yeah yeah! Number one!”).

Jackson would have been better served by enlisting the help of producers who actually paid attention to his music instead of just paying lip service to it. (Justice, with their Jackson 5-aping “D.A.N.C.E.,” comes to mind). It’s depressing to note that Thriller 25’s dubiously talented collaborators weren’t forced on Jackson by his label; he’s working with will.i.am, Akon, and 50-Cent to help him with his (third? fourth?) comeback album, supposedly due sometime this year.

If it sounds anything like Thriller 25, Jackson should start planning for Thriller 30 as soon as possible.