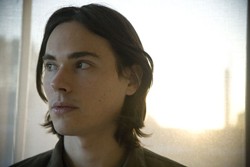 
Say this for Linda Perry. When she gets behind a project, you can’t question her commitment. But even by her standards,the former frontwoman for 4 Non Blondes, now a successful producer (Pink, Christina Aguilera, Courtney Love), brought a rare level of engagement to Ex-Sensitive, the sophomore album by singer-songwriter Ben Jelen.

Perry produced and engineered the album, co-wrote four songs with Jelen, contributed two songs of her own, played guitar, bass, electric sitar and a variety of keyboard instruments, and released the disc on her label: Custard Records. She even found time to make her directorial debut with the video for his first single, “Wreckage.”

Is Perry’s faith in Jelen well-placed? Based on the evidence of Ex-Sensitive, the answer would be a tentative “yes.” Jelen, a native of Scotland who lives in New York and spent a year going to high school in San Antonio, has a soft, pleasant tenor and an easy melodic grace. His knack for hooks shines on “Where Do We Go” and the carnival psychedelia of the title song has mid-period Beatles echoes about it.

On the other hand, his sincerity and musicianship are currently running a couple of steps ahead of his lyrical vision. As a result, this album makes for an enjoyable listening experience, but not quite a compelling one. Think of him, for now at least, as a lighter, less angst-ridden alumnus of the Aimee Mann/Michael Penn school of thinking-person’s pop. Jelen makes a return to his old SA haunts on March 11 for an NPR Showcase at Gallery Nord. 7pm Tue, Mar 11, Gallery Nord, $25, 2009 Northwest Military Highway, (210) 348-0088