What Doesn't Kill Us 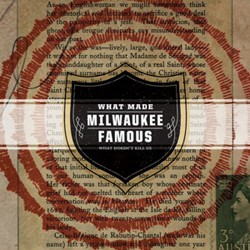 
The second album by Austin’s What Made Milwaukee Famous marks a firm advance, as the quintet branches out from the rather tentative feel of their 2006 debut, Trying to Never Catch Up. The result is a broad, expansive album that samples widely across the dozen tracks, opening up their perspective from their debut’s gloomy, nascent (arguably stillborn) Radiohead-isms. While that influence is still present in the majestic, loping melancholia of “Self-Destruct” and “Resistance St.,” there’s more on the menu: The wonderful “Sultan” delivers rousing, brass-abetted power-pop in the mold of Sloan. “The Right Place” sounds like the Hollies with big backing vocals and a swooning Brit Invasion melodicism. “For The Birds” works a lilting psych-pop vibe like a tauter Shins.

The last half of the album features several acoustic melodies, such as “And the Grief Goes On” and the bounding rave-up “To Each His Own,” both of which succeed largely on the strength of an airtight rhythm section’s propulsive grooves. The latter — which vaguely recalls John Cougar Mellancamp’s “Authority Song” — demonstrates an unknown ability to render catchy, bar-ready, roots rock. They close with the somber Obama-ready country-rock ballad “The Other Side,” which suggests we break out of our collective prisons, asking “What’s the use in hope, if we’re afraid of trying?” A pretty, sweethearted song, it suggests “we try to understand those we despise,” one of the more earnest sentiments expressed in rock this year. Maybe this really is a zeitgeist.

Overall, the album is more straightforward, and the songs tighter and less cluttered than on the debut effort. While What Doesn’t Kill Us really doesn’t hold together as an album that well thanks to their stylistic promiscuity, they’ve
established themselves as a band to watch.