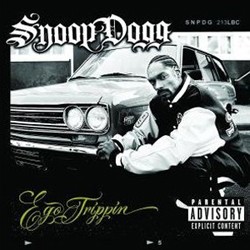 
Years ago, while hosting Saturday Night Live for the umpteenth time, Steve Martin mocked his own jaded comfort with success by assuring viewers, in song, “I’m not going to phone it in tonight.”

The effect of that guarantee was similar to the one provided by Snoop Dogg on the introductory track of his ninth album, Ego Trippin: “I hope you all enjoy this shit right here. I took my time on this one.”

That’s good to know, and it actually seems to be true. The funky bounce of tracks such as “Press Play,” “Neva Have 2 Worry,” and “Waste of Time” (with a great, soulful hook from Raphael Saadiq) bring to mind Snoop’s glory days with Dr. Dre working the console.

“I’m still ballin/dumb bitches still callin/fools still fallin” he tells us, with the classic defensiveness of a hip-hop millionaire long suspected of going soft. He drops his guard a bit for “Waste of Time,” a breakup song whose big epiphany seems to be “that what’s I get for fuckin’ a video model.” With “Sexual Eruption,” Snoop shows himself to have grown into a relatively thoughtful lover, wanting to take his time, so she can get hers.

None of these revelations move the chains forward much, and ultimately, the two best tracks on this long-winded, overly predictable album come from way out in left field. “Cool” is a goofball rip into The Time’s braggalicious nugget, and “My Medicine” is almost too bizarre to be true: a wacked-out hoedown tribute to
Johnny Cash (“a real American gangster”), complete with dobro and a talk-sung nursery-rhyme lyric. In a rare moment of self-awareness, Snoop tells us in this song that his love lasts only as long as his high. He might want to score more chronic the next time he goes into the studio.