Waiting for the ‘Grand’ moment 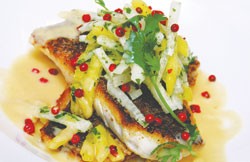 
The Merchants Grand website is enticing and encouraging. Makes you want to go there. Knowing that the chef, Jonathan Parker, demonstrated considerable seafood cred at Pesca, then proved his flexibility at the quirky but rewarding Las Leyendas, is even further incentive. A couple of early-on visits to the bar for wine and snacks also suggested that the place has promise. The wine list is short but well-priced at $28-$48, appetizers such as the creamy field mushrooms on grilled toast were simple yet rewarding, and the Hill Country paté was nothing short of sensational.

So why, then, have the actual lunches and dinners proved to be so uninspiring? True, I have liked the lunch-time meatloaf on focaccia with caramelized onion well enough to eat it twice. But a chicken-tinga pizza failed utterly to excite, and a crayfish, scallop and shrimp enchilada appetizer appeared to have been made by someone with little feel for Mexican food; it smacked of chile powder and processed cheese.

Part of the problem for me may be the equally yawn-inducing interior. There’s a great shell there, tidily cleaned up from the appealing chaos of the old Alamo Heights Hardware Store, but it remains just that — a shell waiting for something to happen. Nostalgic black-and-white photos of ’09 neighbors, a décor item the website continues to solicit, are unlikely to do much to liven up the place. (Maybe some commissioned works featuring hardware?) The bar works reasonably well because it has a space of its own (but apparently not yet a name despite website entreaties for suggestions). So does the smaller area up a step from the main dining area; it at least has colorful paintings on the wall, paintings that had been exchanged for remnants of Fiesta robes for the yearly occasion. Something funkier than remnants of royalty desperately needs to happen, however.

Funky doesn’t imply careless, of course, and a recent repeat of the Hill Country paté, complete with crisp cornichons and marinated onions, suggested that the kitchen can certainly be consistent; I loved it the second time as well. I was also reasonably impressed by the salad of frisée with Millionaire bacon (the slab of bacon is adulterated, maybe with sugar and pepper, but in any event it’s crisp and potentially addictive) and a perfectly poached egg. No fireworks, but no letdown either.

The $38 wine I had picked proved to be unavailable that night (it was a Rosso di Montalcino from Col d’Orcia, and our almost too helpful waitress inexplicably suggested a $68 Jordan cab as a substitute), but a 2006 Siduri Pinot Noir from Russian River Valley played pinch hitter with aplomb; maybe it was the bacon that allowed it to work even with the salad.

And with the pan-fried breaded pork loin. Actually, the pork was so neutral that anything would have worked with it. It was the mention of hazelnuts that had seduced me, and though there were there plenty of toasted whole nuts in evidence, they were just a little too hard to actually eat with the pork; they kept falling off the fork. (Which suggested they would have been great worked into the breading instead.) I’m going to quibble about the crunchy texture of the sweet-sour squash accompaniment, too — and with the bland bok choy that was served with this and a following entrée. No complaints whatsoever about the cubed, fried potatoes, however; they were sensational.

Chef was back in fine form with a Market Fresh Selection of seared Texas redfish. I imagine that he was soft-pedalling the chile in the pineapple-serrano broth, but the stack of flaky fillets was a joy to behold and even better to tuck into. A crunchy jicama slaw added contrast, as did a very generous sprinkling of pink peppercorns.

And yet, the spark still failed to ignite. So I returned for a follow-up lunch and was immediately seduced by the creamy corn chowder — cream being such a guilty pleasure these days. The bowl was brought home with bits of bacon and sharp slivers of scallion. I next briefly contemplated the salmon a la plancha, about which I’d heard good things, but settled instead on a daily blackboard special, the fried calamari steak atop a bed of tomato-sauced rigatoni with parsley pesto. Apart from feeling that the description should have read “steak fingers,” this was a modest dish made magnificent by insight coupled with restraint. There was just enough tender and tempura-battered squid, the pasta was impeccable, its sauce just spicy enough, and the parsley pesto an inspired accent. It looked good, too.

So there’s hope — hope reinforced by a sublime bread pudding oozing with milk chocolate that capped my evening meal. But hope had better hurry up; though it may have its moments of madness, I’ve yet to see the place more than about 30-percent full. It takes deep pockets to keep that scenario alive. •