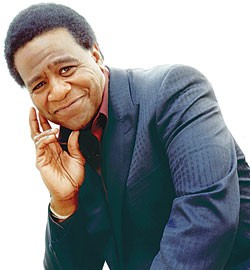 
Al Green is like Aretha Franklin in reverse. When Aretha stepped away from her church roots to sing pop music in the early ’60s, her gospel followers were mortified. When Green left a still-thriving R&B career in the late ’70s to establish a ministry, his fans were equally dumbfounded. In the three decades since Green made himself pastor of Memphis’s Full Gospel Tabernacle, longtime fans have delighted at every indication that he’s willing to once again dip his toes into the world of secular music.

Green’s two most recent albums, I Can’t Stop and Everything’s OK, were much-lauded reunions with producer Willie Mitchell and the Hi Records rhythm section. Those albums
reasserted (in case his gospel work left any doubt) that Green has cheerfully skirted the ravages of age, with a voice that remains as lithe as Sam Cooke and as gritty as Otis Redding. The Mitchell reunion projects, however, didn’t quite rekindle the magic of the Green-Mitchell songwriting team or re-establish Green as a contemporary force in soul music.

Green’s new album, Lay It Down, finds him interfacing with hip-hop, as Roots’ drummer Ahmir “?uestlove” Thompson co-produces and supplies the funk. Strangely, however, this apparent concession to contemporary tastes results in the most classically Al Green-sounding album the artist has made since disco threw him off his stride in the mid-’70s. You get the outlandishly deep bass tones, muffled drums, organ, and horns used for rhythmic accents, and discreet string sweetening.

If the album is a sonic (and vocal) neo-soul wonder, it falls short of all-out brilliance because songwriting is an afterthought these days for Green. He’s not so much secular as universal, writing love songs that may be intended for Jesus Christ, but leave open the possibility that they’re directed at a woman. It’s a strategy that’s worked for countless soul singers, but its wholesome piety negates the kind of eccentric touches that used to enliven Green’s material: the complaints about his lover taking his money and cigarettes in “Take Me to the River,” or the cocky, horn-dog come-ons of “I’m a Ram.”

In short: Green can transcend his material like nobody’s business, but are we wrong for wishing he didn’t have to?