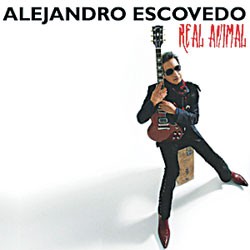 
Among his considerable attributes, Alejandro Escovedo could lay claim to being the Forrest Gump of rock. Whenever seminal events happened, he was usually in the vicinity.

As a member of the Bay Area punk band the Nuns, he opened the Sex Pistols’ final show in 1978. While living in New York’s Chelsea Hotel, he observed the deadly psychodrama between Nancy Spungen and Sid Vicious. With the band Rank and File, he helped to launch the cowpunk boom of the early ’80s. And as a guitarist for the much-admired True Believers, he helped to define Austin as the “live music capital of the world.”

Escovedo has rarely explored that history in song, but he’s in a retrospective mood on Real Animal, his 10th solo album. His unerring taste and relentless honesty have always made him an artist to admire, but his albums can be dour affairs, because the loose, rocking immediacy so evident in his shows (where his love of The Stooges and Mott the Hoople are evident) only intermittently finds its way to his ultra-serious, soul-baring songwriting. Songs like the playful, teasing “Castanets,” make you wonder what Escovedo could accomplish if he cut loose.

On Real Animal, Escovedo does cut loose. He writes about the Nuns, the Chelsea, Rank and File, and the Troobs, and the exercise frees him to simultaneously inhabit and comment on his younger, snottier self. It’s a rare songwriting trick, and he uses it to great effect on “Chelsea Hotel,” an homage to the self-destructive poets and musicians he knew there in the late ’70s.

The masterstroke is “Sensitive Boys,” a paean to the Amerindie rebels he toured with in the ’80s. The subject matter prepares you for a raucous raveup, but he opts for a tender soul ballad that lands between Lou Reed’s “Coney Island Baby” and the Stones’ “Fool to Cry.” Lamenting lost opportunities while defiantly keeping the old torch lit, the Escovedo of Real Animal is compassionate, self-mocking, angry, and wistful. And he’s made the album of his life, in more ways than one.