Viva La Vida or Death and All His Friends 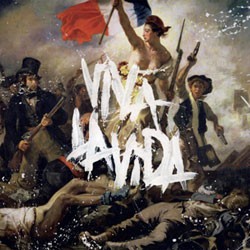 
“Do you know how I know you’re gay? You like Coldplay.”

That line, uttered by Paul Rudd to Seth Rogen in The 40-Year-Old Virgin, crystallized what many
hipsters had whispered since a wide-eyed Chris Martin rhymed “yellow” with “yellow” in 2000: Coldplay sucks. Despite selling 30 million records worldwide, much of the public writes them off as undeserving of their massive success.

Coldplay must feel the same way. If they didn’t, they’d be content to re-write “Clocks” ad nauseam instead of releasing the experimental (for them) Viva la Vida or Death and All His Friends. This is Coldplay’s do-or-die last stab at respectability, and despite some genuinely winning moments, it just doesn’t cut deep enough.

While Viva is a positive step toward attaining the artist cred they desperately crave, much of that credibility belonged to someone else first. Coldplay nicks the pseudo-military uniforms of Arcade Fire, the spacey soundscapes of Sigur Rós, and takes their U2-worship to the next logical step by hiring The Joshua Tree’s Brian Eno as producer.

Eno uses his powers for good, pushing the band to explore new sonic territory while they tread familiar emotional ground. And a lot of it works: “Cemeteries of London” grooves on a ghostly flamenco pattern; “Lost!” pumps up the volume with stomps and handclaps, and “Lovers in Japan” is a shimmery sequel to Peter Gabriel’s “Solsbury Hill.”

The more adventurous tracks — such as the three-movement “42” (or, “Not So Paranoid Android”), “Strawberry Swing,” and “Yes” — are interesting efforts but never seem to take off. Martin doesn't help by adding lyrics simple enough to be sung by stadium crowds but lacking in actual depth — and his more profound missives (“Those who are dead are not dead /they're just living in my head”) could have come from a fortune cookie.

Martin was always at his best playing the hopeless romantic. He still swoons on the two title tracks (the gorgeous “Viva la Vida” in particular), but fights that role for much of Viva. However, singing about “heavier” subject matter in a lower register doesn’t do much to fight the stereotypes that have dogged Coldplay from day one. Even dressed in a soldier’s jacket, Martin just can’t hide the heart on his sleeve — not that there’s anything wrong with that.