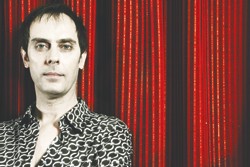 
Peter Murphy’s dubbed the “Godfather of Goth” for good reason — the English singer broke through the gloomy London scene as a dark king in the ’70s and ’80s with his seminal band Bauhaus. His high cheekbones and deep voice likened him to a macabre version of David Bowie, furthered by his androgynous costumes and posturing. Whether rising from coffins or appearing as vampires onstage, Bauhaus was one of the defining acts in the goth movement — their 1979 classic “Bella Lugosi’s Dead” hailed as a signature song of that era. Murphy went on to enjoy a solo career that explored much broader stylistic territory after the breakup of Bauhaus, and his biggest solo hit, “Cuts You Up,” remains an anthem on dance floors full of black leather and lace. $20/25, 7pm, White Rabbit, 2410 N. St. Mary’s, detourtickets.com.