Willing but not Abel

Checking in at Earl’s new outpost 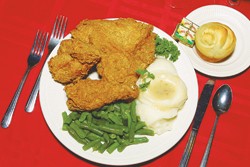 
Structural members of the residential tower at Broadway and Hildebrand are finally visible above ground; the completed building will transform the intersection in ways hard to imagine now. Across the street, Ken’s Texaco and the purple-painted house once home to La Calesa have been erased, expectantly marking another transformation. In this context, it seems appropriate to ponder the passing of Earl Abel’s from the Broadway scene. Now celebrating its 75th year — under new ownership and in a far less auspicious location on Austin Highway — the venerable institution is striving mightily to retain its nostalgia-based hold on a fickle dining public. A newly unveiled mural comprised of montaged photos contributed by former owner Jerry Abel, son of founder Earl Abel, is at once a lesson in local history and an expression of popular culture. And though a few new items have been added to the menu, it, too, is a kind of historic document. Salmon croquettes, meat loaf with Creole sauce, Salisbury steak … all still there as daily specials. And of course, fried chicken is still “our specialty.” If nostalgia and good-will alone were enough, success would be a slam-dunk.

Even Central Casting might have a hard time finding the “Hi, honey” waitresses that were once an Earl Abel’s trademark. Today’s servers, clad in black pants or skirts and white shirts, are much less like refugees from Fried Green Tomatoes. But ours was efficient and helpful, offering to bring a soup and salad first, as the kitchen’s fryers were apparently too backed up to produce the fried- veggie combo platter that is the centerpiece of the modest appetizer section. (An old menu from my files didn’t list any appetizers at all.) The “classic” dinner salad is ordinary by today’s elevated standards — its croutons are straight from a package, and the house-made honey-mustard dressing is heavy on the honey — but there were some cherry tomatoes to add color, at least. (New to the menu are both Greek and spinach salads.) A cup of potato soup proved milky in both taste and consistency, yet the flavor was honest and the temperature right on target.

Earl may never have done the onion rings that now bear his name, but he would have been proud to serve them; they are battered and fried to perfection, to use an annoying term that does appear, in various forms, on this and other menus around town. The fried mushrooms were a little watery, but essentially OK. And the big batons of fried zucchini were a pleasant surprise: The flaky coating actually played second fiddle to the appealingly al-dente vegetable. A dutiful ranch-type dressing is the default dip, but our waitress offered to bring both cream gravy and hot sauce, and who were we to refuse? You, on the other hand, probably should. The salsa is pedestrian and the cream gravy lacks soul — not to mention steak drippings and serious black pepper.

You can still get fried chicken to take away from a separate entrance, just as you always could at the old location. (I don’t remember T-shirts as part of the takeout menu, but that could be visual editing on my part.) And of course the combinations and permutations of chicken-parts plates remain a staple. “Three Pieces Mixed (our choice)” seemed a reasonable option at first glance, and the drumstick and wing components performed admirably, the coating — if a little salty — being just assertive enough and the meat nicely moist. The third part of the plate was a mystery component — mostly back, it appeared. Next time, I’ll make my own choices. Lumpy but genuine mashed potatoes, unencumbered by fancy additives such as roasted garlic or wasabi paste, accompanied the chicken; their cracklin’ gravy made less of an impression.

Stubbornly sticking with the chicken motif, we also selected a daily special of chicken and dumplings. I won’t bore you with a dumpling dissertation (check out about.com/od/chickendumpling), but I will comment that such dough as I could find clearly never rose to the top of the pot. The chicken itself was good and plentiful, but the combination was cheerless and lacked seasoning. You may rightly accuse me of perversity in ordering the candied yams as one vegetable of the day. Even forgetting about the possibility of tiny marshmallows, it was likely I would not be pleased. But the bland green beans weren’t my fault; they were a substitute for unavailable black-eyed peas, which can usually stand up to overcooking. Green beans are less forgiving.

A return visit was clearly in order. Besides, I was curious to see what the kitchen did with salmon croquettes, a dish that disappeared from most menus 30 years ago. (There’s a classic recipe in Joy of Cooking.) “That won’t take any time at all,” said my cheery waitress, and sure enough, no sooner had I cracked the latest Current but the plate arrived. “Suspiciously quick,” I offered. She only smiled. Now, I could be wrong here, but it strikes me that the “creamy dill sauce” topping the plate is itself uncannily like the above-cited cream gravy with added dill. As for the hockey-puck patties, they lack any of the levity this classic can have when freshly made with canned or leftover salmon, (non-lumpy) mashed potatoes, a little egg, and some parsley. A quasi-casserole of gratinéed rice and zucchini, straight from the original menu, was my vegetable choice. Pickled beets might have been a better bet.

Looking around at other diners obviously enjoying repeat visits this early Saturday evening, it was clear that there are many who won’t share these opinions, and that’s fine. There’s nothing wrong with preferring food that doesn’t require a degree in foreign languages or a subscription to Gourmet. But honest food still requires honest effort. (This is not one of Earl’s pithy sayings immortalized on plaques placed around the restaurant, but it could well be.)

There’s also nothing wrong with ordering dessert first, as one gentleman did that Saturday. “I want to make sure there’s still some of the coconut meringue pie left,” he admitted to his waitress, and he has my sympathies. Though pies and cakes no longer have quite the pride of place they did in the original location, they’re still prominent in the minds of regulars, and the coconut exemplifies all that is worth remembering about this institution: It’s generous, sweet, satisfying, and still a bargain at $3.50 a slice. Sometimes that’s all you need. •