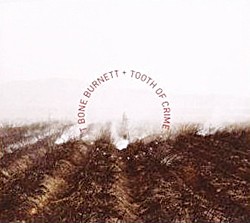 
Sticky. That’s the new buzzword. A record’s sticky if something elusive yet compelling makes you want to keep revisiting it as you divine new levels and nuances, progressively getting sucked in. Radiohead’s In Rainbows was sticky. In the pre-iPod era, we called ’em “sleepers.”

T Bone Burnett’s new studio album is sticky. It’s loosely based on the 1972 Sam Shepard play, a sci-fi rock-’n’-roll atomic Western (eat your heart out, Zachariah). Burnett was drafted to come up with fresh music during one of its periodic revivals; however, Tooth of Crime contains additional material and isn’t the “official” score. Scanning like a cross between Tom Waits, John Zorn, and Los Lobos offshoot the Latin Playboys, the record may be off-putting at first, chiefly due to Burnett’s mostly recited vocals, although ex-wife Sam Phillips pitches in on several tracks to apply a distaff salve to the abrasions. And with patience, songs take on distinctive personalities: “Anything I Say Can and Will Be Used Against You,” for example, is creepy and hallucinatory, its slowed-down rockabilly thump punctuated by blatting horns, clanking percussion and Marc Ribot’s twisted fretboard textures. Another highlight is the psychedelic “Here Come the Philistines,” ablaze with interstellar twang, droning bass lines, and nomadic drumming.

Burnett’s lyrics generally stay in sync with the dialogue of Shepard’s characters’ (chief among them: aging rock star Hoss), but the part-surreal, part-Blade Runner tone is provocative and intriguing in its own right. “I was conceived in a behavior station/light years from civilization/I was born in oblivion/half Balinese, half Libyan,” intones Burnett, in the jazzy, noir-ish “The Rat Age.” The man’s got apocalypse on his mind. Pull up a chair, kid. Uncle T Bone gonna tell you ’bout sticky.